You are here: Home

Nomads is a provider to the Tourist Industry of services and information, specialising in the exploration, development and promotion of adventure travel, climbing and trekking in the deserts and mountains of North Africa, the Middle East (particularly Jordan and Wadi Rum), also in India and other exotic places.

Additionally, we are authors of, and contributors to, various climbing, trekking and travel guides and provide articles and photos for the press and outdoor media. We have also worked with TV and radio.

Following the discovery of Wadi Rum in Jordan, as a rock climbing and adventure tourism area by Tony Howard and Di Taylor in 1984, nomads was created to enable them to work formally with Jordan's Ministry of Tourism.

Their ensuing explorations and guidebooks made Rum, according to a leading British mountaineer, "one of the world's foremost desert climbing areas" and in the words of Jordan's Director of Tourism, "put Jordan's desert tourism on the map". Tony & Di were accompanied by Al Baker and Mick Shaw on their first visit to Wadi Rum. They were joined in following years by other climbing friends including French Guides Wilf Colonna, Bernard Domenech. The Wadi Rum Bedouin played a major role from the start and continue to do so as does Wilfried.

Working closely but informally with a group of similar minded professional climbers, cavers and mountain sports activists from across Europe we have since carried out work for other Tourism Ministries, Travel and Conservation organisations including projects for various TV and publishing companies as well as for H.M. Queen Noor, the Palestinian Authority Bethlehem 2000 Project, and the Oman, Egyptian and Nagaland Tourism Authorities. Recent projects in Jordan were sponsored by USAID/SIYAHA. We were also invited to become Team Members of The Abraham Path Initiative developing a trail through Al Ayoun in north Jordan "in the footsteps of Abraham" as part of a route from Turkey to Hebron in Palestine, via Syria and Jordan. The Ayoun Project is now run by the local community and our guide to Walks, Treks, Climbs & Caves in Al Ayoun is was published in 2012. This project continues in 2012 with extended trails for the Abraham Path, and ongoing work on a reinvigorated 1990s project of ours, the proposed country length Jordan Trail.

Countries with which we have been involved on a professional basis are Egypt, India (North East, including Nagaland and Bodoland etc), Jordan, Lebanon, Libya, Madagascar, Morocco, Norway, Palestine, Oman and Yemen. Additionally, we have also contributed to guidebook work and publications on Algeria, Ethiopia, Iran, Sudan and the UK.

The prime purpose of nomads is to explore and carry out feasibility studies, development and promotion of environmentally aware adventure tourism in little known areas, usually in desert and/or mountain countries. Nomads believe that in addition to benefiting their sponsor, their work will also help to open these areas to climbing, trekking and adventure tourism, in a way that will minimise change to the environment and maximise any potential benefits to the lifestyle of the indigenous peoples. This is a delicate path to tread but one which we care deeply about, and which offers an opportunity for us to give something back in return for a lifetime of climbing and travel.

We hope our discoveries will give as much pleasure to others as they have to us, whilst also inspiring them to make their own explorations in a manner that both respects and benefits other cultures and the world's wild places.

Our achievements were rewarded by an invite to a reception at Buckingham Palace in 2012 "for those involved in Exploration and Adventure". See below: 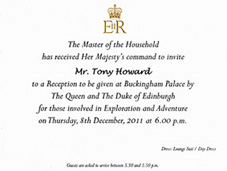 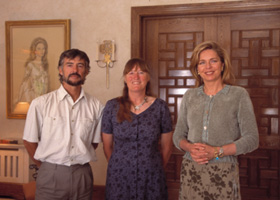 "Your work is foundational to the growth of trails throughout the region. Thank you for your vision and hard work."
Anisa Mehdi, President & Executive Director, Abraham Path Initiative, 2020

"Climb the mountains and get their good tidings. Nature's peace will flow into you as sunshine flows into trees."
John Muir

"…I don’t want to settle, I love to roam… I feel free and happy, when we settle down, we grow pale and die.”
Santanta, Kiowa Chief, USA, quoted by Survival International in "We, the people".

"We shall not cease from exploration
And the end of all our exploring
Will be to arrive where we started
And know the place for the first time."
TS Eliot, Little Gidding

Quest into the Unknown
2019 OWPG (Outdoor Writers & Photographers Guild) - HIGHLY COMMENDED.
The judges noted that, “It reads like the outline for a film, a detailed and sometimes deeply personal account of a life spent in the singular pursuit of new climbing and outdoor adventures,spanning the globe and bridging the gap between the old world of make do and mend crag rats and the modern world of sport climbing and trekking.”