You are here: Home > Links

Egypt - Sinai Check out Desert Divers for climbing, trekking and, of course, diving in the Red Sea. Also for the first climbing and bouldering guide to Sinai, see their webpage. And the Sinai Trail, see above

Lebanon see Rock Climbing Atlas, Middle East for info on climbs in Lebanon, which not only has some nice looking crags, both sport and trad, but also world famous caves. Wynand Groenewegen says "we had a very good and interesting time when we were there. You will find information in our 'Rock Climbing Atlas to Greece and the Middle East'. We have also included maps." More up to date, And check out Beyond Climbing.

Nepal Dec 2004 We were invited on a trek round the Annapurna Circuit with friends. Billed as "possibly the best long distance walk in the world" we had always wanted to do it but thoughts of crowds of trekkers put us off. However, in December 04 there were just about none so we had the trail to ourselves. Maybe it was partly the time of year, but more likely the Maoist insurgency threat was putting people off. For a first class Sherpa company, contact Nima at Cho Oyu Trekking (see below). Sadly most of the trail has now been bulldozed to make vehicle access, leaving only the three or four days over the pass in it's original state.
Dec 2011The same two friends asked us to join them again to trek the Everest Trail up the Khumbu valley to Tengboche before doing a second trek in the Annapurna massif. Once again we had great weather (chilly at night of course) and met very few other trekkers. Cho Oyu Trekking organised everything superbly once again - definitely recommended!

Turkey 2005 North East of Antalya and south east of Egirdir is a range of limestone mountains called Dedigol Daglan with a superb 600m SE Face climbed by Dave Lucas on one of his Hot Rock trips. The Turkish climber in the area is Ozturk Kayikci. Geoff Hornby has also climbed here. It looks like a beautiful area with lots of scope for development.

The coast mountains west of Antalya have been visited recently by Geoff Hornby and Susie Sammut, climbing a few new routes up to 700m TD. There are also some Turkish routes here done by climbers from Antalya University.
2006 see Rock Climbing Atlas, Middle East for info on climbs in Turkey.
2007 See that years Alpine Journal for climbing info in Turkey by Geoff Hornby.

Tunisia There are no decent maps or trekking guidebooks as far as we know. The highest summit is Mt Chambi, 1554m, reached by an easy walk in a National Park. Also in the west the flat-topped Jugurtha’s Table is easily reached by steps through its cliffs. In the west, the Cap Bon Peninsula has some bouldering and a short but pleasant walk round its tip - and the island in the Med out to the west looks to have good limestone cliffs but is out of bounds. Nobody would take us. Down south the desert drive is fun with a chance to stay in an underground hotel where the Star Wars bar sequence was filmed.

Three friends of ours who guide in Europe:

We would like to thank the following who have sponsored us on our treks, climbs and travels:

The following publish books to which nomads have contributed. We also include a link to Echoes of a Dream by a good friend of ours: 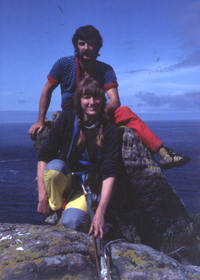 Tony & Di on the top of the Old Man of Hoy, a slender and somewhat rickety 450ft high sea stack in the Orkney Islands off the north coast of Scotland.

"Most people, I find, don’t want to suffer and thus stop short of fulfilling their dreams."
Doris Vallejo, Art by Boris Vallejo

"Climb if you will, but remember that courage and strength are nought without prudence and that a momentary negligence may destroy the happiness of a lifetime. Do nothing in haste, look well to each step and from the beginning think what may be the end."
Scrambles Amongst The Alps, Edward Whymper

I knew, deep and safe, beyond mere intellect, that there is nothing like a wilderness journey for rekindling the fires of life."
River: One Man’s Journey Down the Colorado, Source to Sea, Colin Fletcher