You are here: Home > About Us

Founder and ex-Director of Troll, one of the world's leading brands of climbing equipment from 1965 to 1995 when the company was successfully sold. During this period was the designer at Troll, largely responsible for the world's first sewn slings and harnesses for climbers, see Mountain Forum website for article by Tony on Climbing Harness Development and other subjects: harness_development.pdf. Tony was also an Ex-Outward Bound, National Mountain centre and Mountaineering Association Instructor and British Mountaineering Council Guide. Fellow of the Royal Geographical Society and Outdoor Writers' Guild member. Participant in the 1998 British Government DTI Tourism Trade Mission to Oman and Yemen. Invited to a reception at Buckingham Palace in 2012 "for those involved in Exploration and Adventure".

Photos and articles published in UK and International press and specialist magazines. TV coverage in Jordan, Norway and the U.K. Radio coverage in the UK, Jordan and Oman. Wrote the Intro to the 2003 Edition of the classic W C Slingsby's guide to Norway, The Northern Playground. Received Geographical Award (1999) from Royal Geographical Society, on behalf of Troll Climbing Equipment, for design and supply of expedition equipment. Featured with Di Taylor in BBC series 'The Face' about the discovery and development of Wadi Rum.

Author of various climbing guide books to England and Norway and four guides to trekking, climbing, canyoning and caving in Jordan. Contributed to 'Rock Climbing in Oman' by Alec MacDonald and to the Egypt, Jordan and India Rough Guides. Joint author with Di Taylor of 'Walks in Palestine with The Nativity Trail'. Author of three books, the award winning 'Troll Wall' also 'Adventures in the Northlands' and Tony's autobiography, 'Quest into the Unknown'.

Invited to Buckingham Palace meeting of 'explorers and adventurers'. Invited to talk at the Royal Geographical Society, London, on their Discovering Jordan event.

In the late 1990s, Tony and Di had the original idea for what became in 2016 the 650km Jordan Trail. From 2000, they worked with Mark Khano of Experience Jordan for a number of years until the Jordan Trail Association was formed to further develop and promote it.

2018 Climber ran a full page story on Tony as one of their Living Legends series.

Di Taylor
Ex-designer for Troll. Over 50 years experience of rock climbing, mountaineering, caving and exploratory jungle and desert travel including first ascents in England, North Africa and the Middle East and new treks in Nagaland and Bodoland, N E India. Featured with Tony Howard in BBC series 'The Face' about their discovery and development of Wadi Rum.

Worked with Tony on the development of the Jordan Trail, an project we proposed back in the 1990s. Together with Mark Khano, Osama Cori and Amjad Shahrour, identified the whole route from Um Qais on the Syrian border to the Red Sea south of Aqaba in spring 2014 and finished exploration in Nov 2014 see Jordan Trail 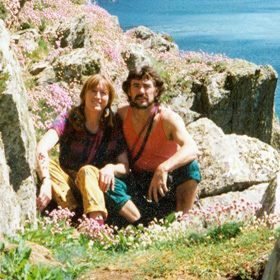 Tony & Di - once upon a time in Pembroke at top of one of UK's best sea cliffs. 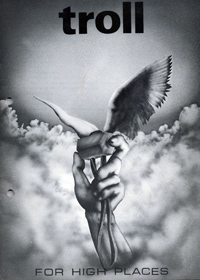 An early Troll climbing equipment catalogue cover - the company that gave wings to climbing as designers of the world's first range of nuts, slings and sit harnesses.
Artwork by Bruce Mills

On the rocks.Di Taylor.pdf a story by Di Taylor written in the 1990s about her life and climbs for On the Edge magazine.

Tony's autobiography, 'Quest into the Unknown', was published by Vertebrate Publishing in April 2019 and is available in bookshops and from Amazon 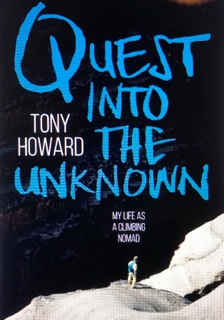 A podcast link, Leon McCarron talks to Tony about his book, Quest into the Unknown