You are here: Home > Projects

N.O.M.A.D.S. discovered and developed climbing & trekking in Wadi Rum with and for the local Bedouin, initially in 1984.

Since then, we have carried out feasibility studies in Jordan, Oman, Egypt, India, Libya, Palestine, Morocco, Mali and Madagascar for their respective Tourism Organisations; also for HM Queen Noor, Jordan's Royal Society for Conservation of Nature, the Moroccan National Parks Authority, Birdlife Middle East, the Royal Society for the Protection of Birds, The Abraham Path and Extreme North East India.

Tourism in Jordan
We prepared a Report on the threat of rapidly increasing tourism to the people, environment and wildlife of Wadi Rum for H.M. Queen Noor of Jordan. A copy of the Report was later requested by the World Bank.

We were twice hosts for the UK visit of Bedouin from Wadi Rum sponsored by H.M. Queen Noor and the Tourism Ministry to attend courses in rope safety and mountain rescue, enabling them to work as Mountain Guides.

We also prepared a leaflet on Safety and Environmental Awareness for Climbers and Trekkers in the Wadi Rum Protected Area for Jordan’s Royal Society for the Conservation of Nature. We have also been assisting Birdlife Middle East on various promotional projects in south Jordan.

Also in Jordan, we proposed, assisted with, and featured in an Austrian TV film about the mountains of Rum and were the subject of a BBC documentary based on our discovery of these mountains and the now world famous Bedouin climbs documented in our guidebooks to Jordan.

We were also involved in the development of the Abraham Path and The country length Jordan Trail which was our idea in the 1990s and which we completed with others in 2016. We have also written four climbing and trekking guides to Jordan (see Publications).

Saving rare Moroccan birds
In winter 2000 we worked on overhanging and dangerously unstable sea cliffs building nesting sites for the critically endangered Moroccan Bald Ibis, on behalf of the Moroccan National Parks Authority and the British RSPB (Royal Society for the Protection of Birds).

Palestine Nativity Trail
The millennium also saw us in Palestine with the Palestinian Authority Bethlehem 2000 Project, preparing a guidebook to 'Walks in Palestine' including the newly created Nativity Trail - a 10 day, 160km walk symbolising the journey of Mary & Joseph from Nazareth to Bethlehem. This was, for us, in many ways our most important project and we were honoured to be able to contribute in a small way to the struggles of the long-suffering Palestinian people for a just and lasting peace in their homeland. The resultant book was published by Cicerone Press (see Publications).

Egyptian Red Sea Mountains
With sponsorship from the Egyptian Tourism Authority and private Tour Operators and the essential military permits we have been exploring the little known Red Sea Mountains of Egypt, finding some unique mountains and bizarre rock features. These are spectacular mountains but extremely difficult to get access permits for, the further south you go. Hopefully they will be open for climbing and trekking soon. It would be a boost for Egypt's adventure tourism.

Himalayan Trekking 2002-3
During the winters of 2002 and 2003 we were in the foothills of the Himalaya in NE India, in Assam, Meghalaya, Arunachal Pradesh and Nagaland. Not too long ago this region bordering China and Burma (Myanmar) was the home of warring tribes and headhunters but was recently opened to travel following the Indian Association of Tour Operators' convention, stressing tourism promotion there.

Our journey, to help develop and promote the area for ethical tourism, included lakes, gorges and waterfalls and the Dzikou valley "the best trekking in the NE Region". We also visited little known caves in Cherrapunjee, "the wettest place in the world", as well as rafting.We also visited Buddhist monasteries, National Parks (Nameri and Kaziranga with its one-horned Rhinos), various tribal villages and the Naga Hornbill Festival.

Having opened a new inter-village trek on the slopes of Mt Saramati, home of the Yimchunger Naga, we finished at Guwahati, on the Brahmaputra River where our host, Partha Pratim Das, the manager of Ashoka Holidays Private Ltd of Assam held a Press Conference on our behalf. Partha is now the owner of Extreme North East adventure travel company and partner in Daobai Hospitality as well as The Great Indian elephant Safari (see INDIA pages).

Middle East
We were back in the Middle East in 2004 with Palestinian friends in Jerusalem and in the Bedouin camps of Wadi Rum, updating our guides and photo library to those areas. Articles on our 'Palestinian experience' were published in the UK and Jordan.

Himalayas again
In autumn we joined friends on "one of the best walks in the world", the Annapurna Circuit in Nepal. Sadly, much of this trek has now been bulldozed into a road. Only the days over the pass are left in their original state.

Classic Norway books
2005 Projects included the publication of our new guide to 'Classic Norway. Climbs, Scrambles & Walks in Romsdal', and involvement in a new book on 'Walks & Scrambles in Norway' for Ripping Yarns.

We were also on projects in the Middle East: Palestine, Syria and Jordan.

West African Tours and Jordanian Tourism Development
Dec 2005 / Jan 2006 we were on a project in Mali for our sponsor West African Tours, reporting on Dogon Trekking and the Tuareg Desert Festival.

Easter 06 saw us back in Jordan sponsored by USAID to hold a seminar in Amman on Adventure Tourism for Jordan Tourism Development and other travel professionals. We also did a new trek from Dana to Petra for the Petra company Jordan Beauty Tours.

Wadi Rum Guidebook update
In May 2007 the 4th edition of our Wadi Rum guidebook was published and in September we completed the 2nd edition of our guide to Jordan - Walks, Treks, Caves, Climbs & Canyons (which was published by Cicerone Press in July 2008) returning home via Syria and Turkey.

Petra Park access, and Abraham Path developments
In 2008 we were once again in Jordan on a project of our own to persuade the Petra Archaeological Park authorities and the Royal Society for the Conservation of Nature that access rights need not conflict with conservation, as outlined in numerous UIAA and IUCN documents. We were also invited to join the leadership team of the Abraham Path Initiative, in developing a trail from Turkey to Palestine via Syria and Jordan.

In 2009 we were back in Jordan helping with The Abraham Path around Al Ayoun, near Ajloun, adding new treks and climbs there and in other 'new' areas of Jordan. We also continued our discussions on open access for climbers and trekkers with RSCN, The Tourism Ministry and Petra Park.

Trail development in Al Ayoun
2010/11/12, we were once again in Jordan to assist API (The Abraham Path Initiative) in Al Ayoun then, with API approval, in 2011 the Project was taken over by the Al Ayoun Community. The result is our guidebook to Walks, Treks, Climbs & Caves in Al Ayoun, sponsored by Fadi Ghandour of Ruwwad and the Ayoun Community published in spring 2012. You should visit and stay in a homestay - the area is beautiful and the food and hospitality are superb.

New Books
At the same time, the book describing Tony's ascent of the TROLL WALL in Norway in 1965 was published with excellent reviews, and soon after followed by Adventures in the Northlands, an ebook on Kindle. See Publications.

Jordan Trail
2013 We were working with Jordanians on a National 'Jordan Trail' from Yarmuk to Aqaba - a long term project initiated by us in the 1990s, partially based around existing treks in our books to 'Jordan Walks, Treks, Caves & Climbs and Canyons', and 'Walks, Treks, Climbs & Caves in Al Ayoun'.

Book Award
On our return to UK we were invited out to Italy to accept an Award for Tony's Troll Wall book at the Trento Mountain Festival.

North East India Project
Winter 2013/14 were invited to take part in a survey and promotional film project in Manas National Park, Bodoland, Assam (a newly created "state within a state") on the border of Bhutan, by Partha Pratim Das, who we worked with previously in Nagaland etc (see above). Partha is now operating Extreme North East adventure tours (see India Diary)

Jordan Trail again
Spring and Autumn 2014 & 15 and spring 2016 we were back in Jordan checking out and adding to the Jordan Trail again, very happy to explore a good way through the Dead Sea Canyons and through the Aqaba Mountains to the Red Sea at the end of the trail which, at around 650km, is the longest in the Arab world. In spring 2017 the trail had it's official inaugural through walk with which we were involved, arriving at the Red Sea serenaded by a band with TV camers filming the event. Thanks go to Mrad Arslan and Hakim Tamimi of Tropical Deserts for their info, Mark Khano and Amjad Shahrour of Experience Jordan for their help and support, also Osama Cori of Explore Jordan. See Jordan Trail

Norway, summer 2015 invited to the 50th Anniversary of the First Ascents of the Troll Wall, Europe's biggest vertical North Face, which Tony was a member of in 1965. The celebrations are part of the Norwegian Mountain Festival held annually in Romsdal. See Troll Wall book in publications page.

Norway again in 2016 for the opening of the Norwegian Mountain Centre and Museum in Romsdal to which Tony contributed equipment from the Troll Wall plus harnesses designed by Troll since 1965. 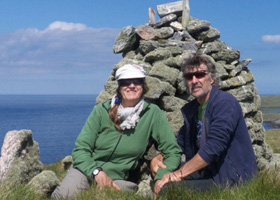 "Your reputation as explorers of new ground goes before you! Thank you"
Duncan Bell
Hot Rock

"Your footprints established tourism destinations in Jordan from almost zero. Jordan is blessed to have such dedicated professional persons like you."
Ramez Habash, Abraham Path Initiative

"…in the context of an ever-warming world, if we continue to fly for our pleasure and education, we need to ensure that such tourism is not itself damaging, and that it genuinely benefits the host communities at the other end."
Chris Brazier New Internationalist, 2008

"Anyone who claims there is nothing left to explore lacks imagination."
Felicity Aston. Geographical Magazine