You are here: Home > Publications > Quest into the Unknown

Publications - Quest into the Unknown

Quest into the Unknown

Back Cover Note by Sir Chris Bonington
Tony Howard has touched foot in places in the world that almost nobody else has ever seen. He has contributed such a vast amount to real exploratory adventure climbing, it would be unthinkable not to have his experiences documented in full. He has taken the time to share with us the distinctive landscapes, cultures and politics he has encountered along the way, and writes modestly yet vividly of his numerous first ascents on climbs across the globe. This is an excellent read from a man who has changed the face of adventure travel.
..........................................

Publisher's sleeve note:
Tony rose to fame in 1965 as a member of a group of young climbers from northern England who made the first British ascent of Norway's Troll Wall; a climb described by Joe Brown as, 'One of the greatest ever achievements by British rock climbers'. Tony went on to design the modern sit harness, now used universally by every climber in the world. He founded the company Troll Climbing Equipment but never stopped exploring. Quest into the Unknown is his story.

Tony has dedicated his life to travelling the world in search of unclimbed rock faces and remote trekking adventures. The scale of his travels is vast: he has visited all of the North African countries, much of the Arab land of the Middle East, the mountainous regions of Scandinavia, Canada and the rocky spine of the Americas, the Himalaya, remote Indian provinces, South East Asia, South Georgia and Antarctica. This book, the last word in adventure travel, takes the reader from Tony's youth spent developing the crags of the English Peak District, via whaling ships in the Southern Ocean, thousand-mile canoe trips in the Canadian Arctic, living amongst the Bedouin in the rocky mountains of Jordan, to the isolated opium tribes of Thailand.
Quest into the Unknown is the jaw-dropping account of a life of adventure that is the very definition of true exploration.

A podcast of an interview about the book with Leon McCarron, on this BMC page.

Robert N 5.0 out of 5 stars A Remarkable Life of Exploration, Discovery and Adventure.

Quest Into The Unknown follows the remarkable life story of the Yorkshire Nomad Tony Howard. From the very first pages of this inspiring book the reader settles into a comfortable narrative full of exciting adventure. The text carries us from youthful days of ramming in 6 inch nails to ascend trees onto climbs with homemade pegs, wonderful days of climbing into the unknown in Norway and to journeys to so many inviting landscapes around the world. You cannot help but share Tony's excitement and awe and wonder as he ventures round each new corner to find experiences almost beyond his imagination. Tony shares his journeys with Di Taylor and with fellow wanderers of the world. The book also covers the development of the Rimmon Mountaineering Club, the success of Troll Mountaineering Equipment and the creation and growth of n.o.m.a.d.s. a company set up by Tony and Di to expose unfamiliar countries to all interested in unusual travel and exploration. The reader is left to wonder what Tony and Di make of, and how they live, what many would consider as ordinary, everyday life! You certainly feel that at times they are more at home away from home! What is most remarkable is that you are left in no doubt that Tony and Di have never lost their 'youthful' excitement wherever they travel and whatever they find. Tony and Di have immersed themselves in the lives of so many peoples and have discovered that kindness is nearly always repaid with kindness and that friendship is a great gift to offer. A fascinating book surely destined to inspire, to open eyes and to be hugely enjoyed and appreciated by so many who read about and travel the world.

D. Elliott 5.0 out of 5 stars Informative and Inspirational

Climbing adventurer Tony Howard first came to my attention in 1965 when he was part of a team making an awe-inspiring first ascent of the formidable North Face of Trollryggen in Norway. Their success was admired but no account was published until 2011 in Tony’s book ‘Troll Wall’ which was a partial autobiography incorporating additional material describing his introduction to climbing with brief details of later exploits. I appreciated ‘Troll Wall’ for not just his achievements but also Tony’s youthful exuberance and boldness, and I am delighted he has been persuaded to write ‘Quest Into The Unknown’, with explanatory sub-title ‘My Life As A Climbing Nomad’.

I am a little bit older than Tony and I share experiences of his entry into the climbing scene, and my first years of climbing followed a similar path to accounts of ‘Early Days’, ‘Teenage Kicks’ and ‘The Rimmon’. While I settled down to marriage and four children Tony upped the tempo and dedicated himself to discovery-climbing around the world. However my own exploits and places visited overlap some of Tony’s, such a South Ridge of Chir Mhor on Arran or Gardyloo Gully on Ben Nevis, or visits to Wadi Rum in Jordan or warm winter rock in Spain. For many older readers ‘Quest Into The Unknown’ will be a nostalgic glimpse back to the values prevailing before today’s bewilderingly vast range of hardware, footwear and ‘what to wear’. For those coming after Tony his book is informative and inspirational, and as an autobiography it is a magnificent contribution to our sport’s huge volume of literature on climbing, mountaineering and associated activities. It is unlikely there will ever be a climbing adventurer with a career to include as many first ascents as achieved by Tony Howard.

It is not practicable to deal with all material gathered into ‘Quest Into The Unknown’ as Tony has accomplished so much, and as a raconteur he presents his recollections, reminiscences and observations in an engaging piecemeal manner. This is totally compelling as he manages to inject appropriate levels of detail and he does so with a high degree of humour. I first read the book from cover to cover but since have dipped into isolated chapters which do not follow a strict chronological sequence yet fit comfortably according to subject matter. For Tony his pioneering exploration is as important as technical climbing, and his friends and those he meets are as important as his adventurous discoveries, and his feelings are as important as his physical surroundings.

Tony chose to divide his narrative into two main parts with a total of sixty-eight chapters from ‘Early Days’ to a ‘Postscript’ referring to what is probably the highlight of a life of highlights being his legacy: establishment of the Jordan Trail to underpin the country’s adventure tourism. In addition to climbing a sparse indication of pursuits covered includes travel, trekking, sailing, canyoning and caving, with links to historical, political and cultural issues alongside trials and tribulations of a successful calling that is anything but easy. A further indicator of content stems from the countries where Tony has travelled, including Jordan, Oman, Lebanon, Palestine, Yemen, Egypt, Libya, Ethiopia, India, Thailand and Madagascar; and the coverage of portrayals are demonstrated by over one hundred colour photographs supporting narrative.

To assist dealings and developments with various authorities, travel and business operations Tony dreamt up the introductory wheeze of n.o.m.a.d.s: ‘New Opportunities for Mountaineering Adventure and Desert Sports’. A major part of his autobiography relates to his involvement with Troll as producer of climbing gear, consultancy services and writer of guidebooks, together with emphasis on camaraderie of colleagues, ethics of commercial behaviour and contradictions of religions. Also Tony inserts commentary on family matters, especially where connected to travelling and taking part in activities. His writing is as fresh as ‘Troll Wall’ first drafted over fifty years ago, and his updated collection of recollections has something for everyone. Tony Howard’s life goes on, and he finishes his informative and inspirational ‘Quest Into The Unknown’ with the homily: ‘you never know unless you go … ’ 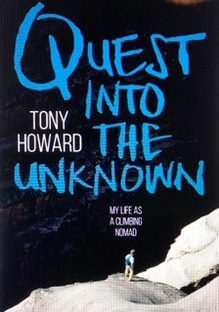