1995 We visited Ethiopia, trekking to the summit of Ras Dashan in the Simiens - 4th highest mountain in Africa (4620m). (Italian climbers had done at least one route on the small north face of the summit, but we had no gear as we had decided before starting on the trip to make it a climbing recce and to concentrate on enjoying the country. We also travelled to Lalibela with its churches carved from the rock, and to Axum north of theSimiens, supposed location of the Arc of the Covenant. Did some short treks just east of here to check out the climbing potential of volcanic plugs there and east again in Tigray, west of the Mekele road. We then travelled out east, to the Djibouti border, being entertained by the frenzied chasing of 'trouser smugglers'(!) up and down the train by the police. Then on down the Rift Valley, hitching a lift with a doctor, to the Konso tribal area, not far from the exotic Omo River leading to Lake Turkana in Kenya. Ethiopia is a wonderful country needing more visitors. Go it alone as we did or, for assistance with planning a trip, contact Tony Hickey of Village Ethiopia

1997 Following our trip, Mark Carr and Christine Evans went trekking in the Simiens in 1997 and had all their gear stolen from their tent on the first night. This, despite the fact they were sleeping in it and there was a compulsory armed guard on the trek! As a consequence, they made some good contacts there. They also got their gear back and returned the following year to do the trek and had a great trip thanks to the locals. Mark & Christine supplied the following info:

Debark guides and accommodation We can recommend the senior Guide for the Simiens: Gelaye Tega. P0 Box 5, Debark, N. Gondar. Ethiopia. Tel Debark 51. Fax 00251 8 11 34 82. Gelaye and his sons are reliable and trustworthy. Accommodation in Debark is at the Simien Park Hotel. P0 Box 12, Debark, N. Gondar. Tel Debark 55. This is run by Zewdu Mokonen who is very honest and trustworthy. You can safely leave your surplus kit with him whilst in the hills.

One of the most intimidating experiences is arriving at a third world Airport when you do not know anyone or understand the system. When you know your arrival time in Addis Ababa we would recommend that you contact Girma Solomon. P0 Box 55670, Addis Ababa, Ethiopia. Tel 00251 1 620 630. Girma owns a Taxi and can also be trusted. It is a good idea to hire Girma by the day if you want to go sightseeing in Addis as he is a great guide to the city. Girma could also arrange accommodation for you in Addis.

2001 At the end of 2001, a group from Bookham Climbing Club, UK, were sponsored by Ethiopian Airlines and Village Ethiopia (see above) to look for climbing potential. Based on info from us and Mark Carr, as well as on the invaluable knowledge of Tony Hickey, they travelled up the east of the Simiens, in Tigray. Here's some extracts from their notes:

"We had a brilliant time and Ethiopia is certainly a magic place. We flew to Addis Abbaba with Ethiopian Airways, and met our local agent, Tony Hickey. Tony has an intimate knowledge of the country and its people and had been responsible for preparing our agenda. He had also obtained a government permit allowing us to go anywhere in the country, even on private land! We took an internal flight onto Mekele, some 500 kms to the north. We were met by a Tigrinean speaking guide and then drove for 6 hours in a 24 seater bus over some difficult unmade roads to the area of Dedum in Tigray province. A previously unused campsite was located adjacent to a small river.

This is an area rarely visited by westerners, and is composed of a high plateau at 2700 metres, where there are a large number of sandstone rock pinnacles rising several hundred metres above the plain. After a one and a half hour walk, followed by a scramble through scrub , the group reached the Northern base of one of these known as St Mary, Gulsha. In common with some other pinnacles a church was located at the Southern base of the cliff. We divided into two parties and climbed this peak by two different routes. The rock quality appeared to be reasonable and of a similar type to Harrisons, Sussex. The left hand route gave two pitches of 5a, 4b. The right hand line was not such good quality. The whole thing was reminiscent of a day at Swanage on the Ruckle. The temperature was perfect at around 20 degrees C. There were numerous adjacent sandstone peaks up to 500m high with some lines clearly possible on most. All these peaks were vertical or close to vertical. Lammergeier were seen for the first time, soaring in the sky to the west and appeared to be nesting on top of one of the pinnacles. This area of Ethiopia is totally unexplored as far as rock climbing is concerned. The sandstone was reasonably solid with some local variations and this would be a Mecca for a keen and brave sandstone climber.

We then made a 10 hour journey towards the historic town of Axum, the ancient capital of the fabled Queen of Sheba around 100BC. Just prior to Axum, darkness began to fall and we camped 2 kms south of a Dudwa village. There were a large number of volcanic rock plugs, up to 1000 metres high. An approach march for one hour from the road along a maze of confusing local paths took us to the base of the nearest. Again, two lines appeared possible.This mountain was Debrazar, and we split into two groups to attempt the summit.

Team one attempted the left hand route. The first pitch was at around VS. The rock was much more solid than the earlier outing on sandstone and was like a hard granite. Higher, there was a pitch of E1 5c, or 5b with aid from a bush. Protection on this route was gradually petering out, and the groove gave way to an open slab with ripples on. The rock was solid but belay stances were non existent and it was necessary to take a hanging belay. The other, harder, route was 10 metres right. Both leaders saw green and black Mamba snakes which luckily made off on our approach. The climbing was steady 4c the protection was zero with the whole rope length out before a belay could be found. The top gave stunning views towards the border with Eritrea across the vast plain some 300m below. We were fortunate to establish two independent rock climbs of great character. The absence of piton placements exacerbated the minimal spots to place gear to secure the abseil ropes.

The major attraction in the Simien Mountain National Park is the spectacular scenery and the exotic wildlife which includes baboons, Walia Ibex, Jackals, the rare Ethiopian wolf. Again there was a great variety of bird life including Lammergeir. There was not sufficient time to fully explore the rock climbing possibilities, especially as some faces were over 1000m high, fully vertical, and also surprisingly vegetated by what appeared to be long grass. In the distance, we could see many steep and high rock spires rising from the valley 2000m below. We found Ethiopia to have an unexpected history and cultural heritage. The people were friendly and generally unspoilt by tourism. The country is now enjoying a more benevolent and democratic government that is encouraging tourism. There are outstanding possibilities for developing rock climbing in this fascinating country. Overall if I were to organise a rock trip to Ethiopia I would not go to the Simiens but concentrate on Tigray where the rock climbing was brilliant. The camping was excellent and we always managed to find a river to swim and wash in.

Dec 2002 David Bruton has an article on Tigray in HIGH/Mountain Mag.

Sept 04 The Konso people of the deep south are being forcibly displaced by the Ethiopian Government to the Mursi and Bodi tribal areas in the Omo River Valley. For further info contact Survival International.

Feb – March 2005 Article on climbing in Ethiopia in CLIMBER Aug 2005 by Pat Littlejohn & Steve Sustad, ascents also reported in the Alpine Journal 2007. Pat Littlejohn describes climbing on the “Arizona style” sandstone Towers of Tigray, NE of Ras Dashan and the Simiens and 40km NW of Mekele. They climbed 3 towers over 8 days in traditional ‘adventure’ style. On Abune Yemata Guh (site of a famous rock-hewn church) they did an E4. On the nearby Nevelet Towers they climbed Sheba Tower, slightly higher at 150m, with some unprotected 5c at a similar overall grade. Horsetooth towers to the E was a bit smaller at 120m but harder at E5 6a. 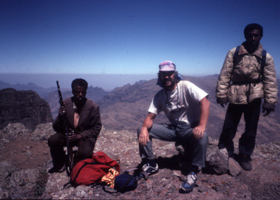