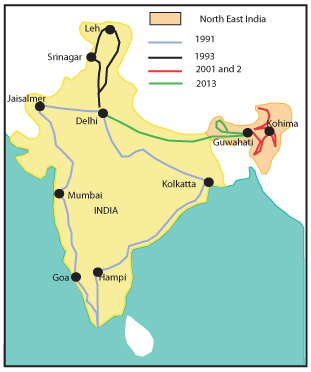 We have made four trips to India, the first to the south, including trekking in the Western Ghats and Rajasthan. We had Christmas in Goa, New Year in Kerala and went bouldering in exotic Hampi as well as visiting the east coast, Khajuraho and Varanasi.

In the mid nineties we went to Ladakh, Zanskar, Kashmir, Chamba and Kulu, trekking in all areas.

In Nov - Dec of 2002 and 2003, we were on exploratory trips to North East India sponsored by Ashoka Holidays, to assess the potential for adventure travel in this recently opened area. We were in Assam, Meghalaya, Arunachal Pradesh and Nagaland, not too long ago home of warring tribes and headhunters but recently opened to travel following the Indian Association of Tour Operators’ convention, stressing tourism promotion there. Our journey, to help develop and promote the area, included lakes, gorges, waterfalls and the Dzukou valley "the best trekking in the NE Region", also unexplored caves in Cherrapunjee, "the wettest place in the world", as well as rafting. We visited Buddhist monasteries, National Parks (Nameri and Kaziranga with its one-horned Rhinos) also various tribal villages and the Naga Hornbill Festival.

We are pleased to note that the North East India Tourism Ministry is now using our quotation on their brochures: "If India was the jewel in the crown of the British Empire, the remote north east of that country is its hidden jewel"; the north east is, according to the Lonely Planet guide "The most varied yet least visited part of India". The seven states (now eight including Sikkim) are connected to India by the twenty two kilometre wide 'Siliguri corridor' between Bhutan and Bangladesh, whilst to the north and east they have common borders with Tibet and Burma (Myanmar). Within are about a hundred tribes including the Khasi Hill People in the south, the Nagas of the east, the Mishmis and Abors of the Upper Brahmaputra and the Monpas of the Himalayan region. Though years of missionary activity mean that much of the tribal region is, like Goa, now Christian, there are still animists in remote regions. Along the Himalayan border, Tibetan Buddhism has been established longer than anywhere in India, whilst in the lowlands of Assam, Hinduism is the dominant faith.

On our first visit, with only twenty days to experience the diverse culture and wildlife of the north east, we were stuck for choice. Fortunately our hosts, Ashoka Holidays of Assam, solved our dilemma. No matter how many times you may have been to India, you won't have seen anything like the land or people of the north east.

We returned to Nagaland in Nov - Dec 2003 to explore the villages on the slopes of Mt Saramati, Nagaland's highest mountain, on the Burma (Myanmar) border - the summit itself proved inaccessible by the route the Naga hunters took us on; sadly bears were seen and hunting them became more important - another time perhaps!

In Nov-Dec 2013 we were in Bodoland in N E India surveying Manas National Park, only recently opened to the public after the creation of Bodoland.

May 2014 Considerable unrest reported in Bodoland. Check the UK Foreign Office website or contact Partha (see below) for latest info.

Check out our other India pages for info on the North East States and Partha Pratim Das of Extreme North East who managed all our trips, initially for Ashoka Holidays of Guwahati, Assam, later with Daobai Hospitality which specialses in Bodoland and Manas National Park. 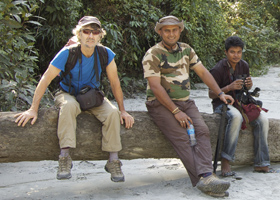 Partha Pratim Das (in the centre of the photo). Partha invited us to North East India and organised all our trips to explore the potential for responsible adventure tourism.

2020. Partha started a new travel company in North East India which we would like ro recommend: Next Initiatives