bouldering on the north west coast and in the Akakus mountains 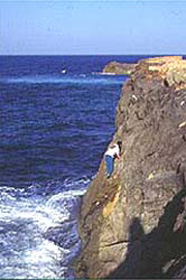 When we first went to Libya in the early 1990s, photos of Colonel Gaddafi were in every hot
el, cafe, shop and street corner. They were as ubiquitous as his unseen and feared secret police. Now, he and they are gone though the country still has its problems.

We wish the people of Libya well - it has been a long wait and a hard struggle that is still not over. Libya is a beautiful and varied country, with warm and hospitable people and magnificent archaeological sites, not to mention endless empty beaches and remote desert mountains waiting to be rediscovered.

Below is some general info and indications of possible climbing, trekking and caving areas. 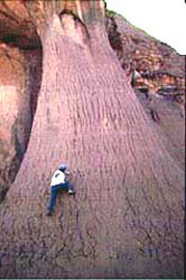 We went to Libya in the early 1990s to assess the Adventure Travel potential on behalf of:

Libya is a huge and fascinating country with (pre-revolution) very welcoming people. There are superb Greek and Roman ruins along the Mediterranean coast (Sabratha, Leptis Magna, Cyrene and many others).

There are also some trekking possibilities and single pitch limestone crags on the plateau overlooking the western coastal plain and to the east, in the coastal mountains of Cyrenica. Also in the east, there are said to be big coastal cliffs near Derna and a big sink-hole just inland. Numerous other caves are also known to exist in Libya.

The Akakus mountains in the far SW (east of Algeria's Tassili N'Ajjer) are best known for their prehistoric rock art, depicting a greener sahara rich in African wildlife. For the climber in search of rock, the area may also hold considerable interest, though the rock towers we bouldered on were extremely poor quality. However, some of the high peaks looked very dramatic and could be of better quality but we had no opportunity to find ways up to the foot of the summit towers, due to limited time.

The Akakus are best known for their prehistoric rock art, depicting a greener Sahara rich in African wildlife.

The extreme northern tip of Chad's Tibesti Mountains reaches up into Libya and could be interesting, but beware of land-mines! Also outliers of Jebel Uweinat on the Egypt / Sudan border with Libya may be worth a visit (if access is allowed). Other outcroppings also exist such as the Hajar el Aswad (Black Rocks) in central Libya.

Travel is best with a Libyan Tour company, who can arrange visas and permits etc as well as providing essential off-road transport. We travelled as guests of Wings who were excellent. Returning home via Djerba in Tunisia we happened to meet, quite by chance, a friend of ours at the airport. He runs a Tunisian tour company and the conversation turned, inevitably, to Libya. "You know", he said, "Last year I took my first group to Libya. I was very afraid as everyone here thinks they are bad people. So I was very happy to find it's not true - they are very nice, maybe even nicer than us!"

It's a sad fact that one man's philosophies and actions finally lead to the destruction of a whole nation, which is now struggling to rebuild itself. Libya is an amazing country with friendly and hospitable people who are starved of regular contact with the outside world.

2003. Ginger Fullen, in his bid to climb every African country's highest summit attempted to reach Libya's high point in the northern Tibesti in 2003 but was foiled by running out of water and supplies approaching from Chad through "crazy, mad, weird terrain… miles of pinnacles and deep gorges bar the way. Nothing like Emi Koussi in the Tibesti massif". For info on eastern Libya, see notes on south west Egypt.

Three views of the Akakaus mountains. See more in the Libya Gallery 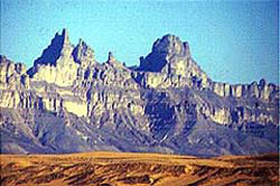 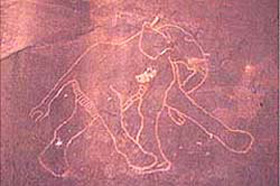 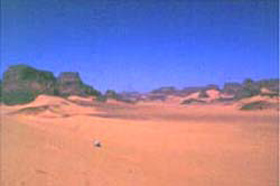