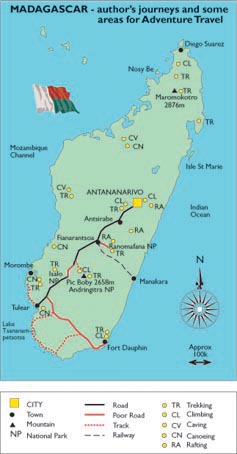 Di Taylor and I first realised the potential for trekking and climbing in Madagascar back in 1981 when we saw a photo of the Andringitra Mountains in the Reader's Digest Book of Natural Wonders. The picture, depicting blue-grey mountains 'scoured by torrential rains ... deeply channelled with crevices and ravines', captured our imagination. The article alongside described 'giant isolated domes that stand 500 metres high ... a series of massive, dramatically eroded mountains, including Boby Peak - at 2658 metres, the highest of the massif'. We were in the midst of organising a trip there when other discoveries intervened. Then, in 1988, the Bradt Guide to Madagascar was published. It confirmed that the Andringitra area not only has 'the finest mountain scenery in the country', but also went on to say 'it shelters some precious virgin forest ... rich in endemic fauna and flora including several species of lemur'. It would obviously be worth a visit, but other mountains continued to occupy our time.

It was 1995 when Andringitra next came to our attention when Kurt Albert and Berndt Arnold climbed two 400 metre routes (F7a+ and F7b+) with hand-drilled bolts for protection in the compact granite. The secret was out! The following year, the quality and difficulty of the climbing and the necessity for bolting was confirmed when a South Tyrolean team climbed the Directissima on the east face of Tsaranoro, creating the magnificent 800 metre 'Gondwanaland', which they graded F7b+, but is now considered to be F7a+. They also set the trend for development of new routes in Madagascar by using a power drill: a dozen quick draws and a few cams are all that are now needed for this tremendous 21 pitch climb.

In 1998, a letter from our friend Francois Lenfant finally spurred us into action. Six weeks later, we drove southwest from Antananarivo (the capital, known to everyone as Tana) on one of the few 'good' roads in Madagascar, winding ever higher past interesting looking crags and rocky peaks. Their unclimbed sweeps of rock rise into wind and rain sculpted cunettes -deep fluted grooves more typical of limestone, but also found on Brazilian granite. Finally, we got our first view of the peaks we had seen in that photo in 1981 - it was strange to think they had not been climbed until 1995! Almost above the village, a prominent dome had been climbed for the first time only the previous week by an American team. As we rounded a bend in the valley, the incredible walls of Karambony and Tsaranoro came suddenly into view - magnificent towers of granite, a climber's dream!

Gilles Gautier, one of the pioneers, has built Camp Catta amongst beautiful boulders an hour's scramble below the cliffs and close to a 'sacred forest' where ring-tailed 'Catta' lemurs live. The name is also a pun on 'Quatre' or 'Four' and, in some respects it has the ambience of the famous Camp Four in Yosemite, if a little more up-market! It's an idyllic place, and well run. Arriving there after the difficulties of travel, all is luxury: solar heated showers, rustic bungalows, perfect camping, excellent food and, of course, beer, wine and rum and impromptu musical entertainment in the evening.

Information on climbing in Madagascar will be found in Vertical (Jan-Feb '99), High 199 (June '99), the 1999 American Alpine Journal and American Alpine News 228, Jan 2000; also, of course, in the Routes Book at Gilles Gautier's Camp Catta at the foot of the Tsaranoro Towers. Also see John and Anne Arran's article on Tsaranoro and the sea cliffs in CLIMBER Feb 2007.
Malagasy adventure travel companies specialising in climbing, trekking, rafting, parapente etc that we are familiar with:

Gilles and Francois are both experts on all things mountainous in Madagascar. Other adventure travel companies will be found in Tana and Tulear and a few UK companies organise treks there. Gilles is also an expert on trekking and climbing in the north as well as Tsaranoro and is pleased to host climbers dedicating their time and energy to set new 'human' lines: lines opened to a large number of climbers. Great short lines have been opened offering more variety than the 'athletes-only' big wall routes!

The scene in Camp Catta beneath the Tsaranoro Towers is fine with more new routes every year.Gargitter Helmut emailed Nov 2005 to say " I read your article about Madagascar. The route Gondwanaland is still 7b+ and 7a+ obligatory. The route has only 2 repetitions and all climbers (an Italian group from Brescia and Arnaud Petit ) said that the route is 7a+ obligatory and if you climb all free, then 7b+."

The park varies in altitude from 720 to 2658m at Pic Boby, the highest accessible peak in Madagascar. Temperature ranges from -7c in July/August, to 25c. Rainfall averages 2.39m with a maximum rainfall in February, averaging 830mm (which is definitely wet!)

There are 40kms of trekking trails and four wilderness campgrounds. (Camp Catta and the climbing at Tsaranoro are outside the Park - climbing is not allowed within the Park, nor is trekking off the existing trails.)

Andringitra has a wide diversity of ecosystems from low altitude rain forest in the east to high mountain prairies in the west. There are also 15 Lemur species and spectacular wild flowers including over 30 species of terrestrial orchids.

And we just heard that The manager of  Andringitra National Park has been jailed with his financial director for helping themselves to the Park Cash Box!

Up North, the season 2001 was extremely active, with around 100 new pitches bolted, in the French 6 and 7 grades. The spot will become a 'must' for tropical climbing and despite the tense political situation (2002), Gilles Gautier hopes to maintain his camp on the islands from April to December. Close to 200 climbers went in 2001 and many more are welcome. The exceptional potential of those cliffs also allows natural protection on new routes - see Piola's articles in French mags. Check out Madamax.

Here's a comment we received on our Madagascar notes: "Excellent page about Madagascar, you have quite inspired us - we think it important that there should be space for both bolted routes and "terrain d'aventure", that bolts should not just take over everywhere and destroy natural lines etc. But no problem with bolts as such, or with bolts in wilderness specifically. Important that climbers should agree among ourselves when areas should be kept as terrain d'aventure. That's it really!" Kate & Alan Carne (Verdun) 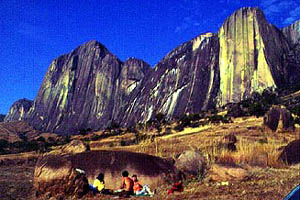 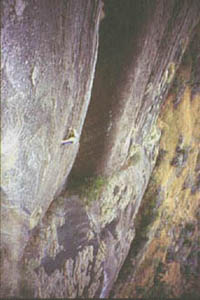 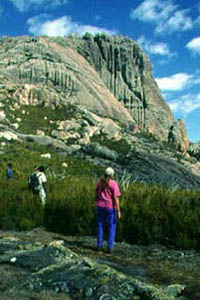 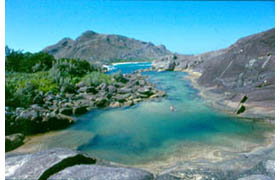