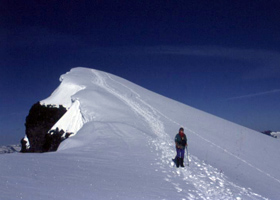 The problem is, we're biased, so when we say Norway is one of the most awesomely beautiful countries in Europe, you can take it with a pinch of salt -preferably from a fleck of wind-blown spray as you take a ferry across one of those exquisite ice-green west coast fjords. Norway is a gem. Not only is it beautiful, but it is a land unplagued by mass tourism and full of opportunities for adventure travel: trekking, climbing, rafting, skiing, fishing, sailing, canoeing - you name it, Norway has it. We have been visiting there since Tony's Lofoten trip in 1962 and his Troll Wall ascent in 1965, following which Tony was a guide in Romsdal until 1969. We still go as often as we can.

General info for visitors to Norway

The Norwegian Tourist Board is, as they say, friendly and well organised. They have offices throughout Norway. You can also contact them in London at: Tel: 0906 302 2003 (brochures) Tel: 020 7839 2650 (information). Their website is: www.visitnorway.com

For info about mountain trekking in Norway, contact the DNT: Den Norske Turistforening / Norwegian Mountain Touring Association. They organise guided tours and mountain courses, mark the trails with the ubiquitous red capital T, build the essential bridges and run the excellent hut system, the most accessible providing meals as well as self catering as in the smaller huts. The smallest are unstaffed. The huts and trails are marked on the excellent 1:50,000 and 1:100,000 M711 Turkart maps, the one to the Glittertind /Besseggen area being Jotunheimen Aust. Contact: DNT, Postbox 7 Sentrum, Storgt. 3, 0101 Oslo Phone: +47 22 82 28 22 or, in Bergen, at DNT Office, Tverrgaten 4/6

Unless you can read Norwegian, the only book you really need for trekking is the Cicerone Press guide to 'Walking in Norway' by Connie Roos, though it doesn't include Romsdal. You may also find useful, Erling Welle-Strand's 'Mountain Hiking in Norway' published by Nortrabooks, Oslo. For climbing, what could be better than Romsdal, where we made the first ascent of 'Europe's biggest vertical rock wall', the 1000m Troll Wall back in 1965, whilst the Norwegians simultaneously made their own new route.

2003 We were in Norway in the summer climbing in the Jotunheim, 'Home of the Giants' and in Romsdal, where Tony was Guest Speaker at the annual Romsdal Fjellfestival.
2005 Our revised guide to Classic Climbs & Walks in Romsdal was published by Cordee - see 'Publications' for more. We also contributed to the Romsdal notes for a guide to Walks & Scrambles in Norway, with routes in Romsdal by Tony, for Ripping Yarns. Additionally there are Norwegian guidebooks to both scrambling and biking in Romsdal by Iver Gjelstenli as well as a Norwegian climbing guide with good topos. For other guidebook info, you could try the Norwegian Alpine Club: http://www.ntk.no.
2007 Other guide book news is that James Baxter’s first book in his proposed series of books on Scandinavian mountains over 2000m is now out. Entitled Hurrungane, it is essential reading for anyone planning a trip to this spectacular and rugged alpine massif on the western edge of Norway’s Jotunheim mountains. Everything you need to know from the routes themselves down to the lichen that grows on the rock; distributed by Cordee.  For other info see Scandinavian Mountains
Writing in the Alpine Club Newsletter, Anders Lundahl reports that following the many massive rock falls in the past 10 years on the Troll Wall, few routes have been climbed. Our 1965 route (The Rimmon Route) was altered considerably as were other nearby routes though the Swedish Route has been climbed since (2002 and 2003) and there is a rumour that a Swiss team climbed the Rimmon Route at about the same grade. Trollkjerringa is extremely loose in the upper pitches making a new line necessary at A2/3 (1999). Trolldom awaits a second ascent. Locals say the whole centre section of the wall is dangerous. The classic Norwegian Route on the left side of the wall is now graded 5.10. 2011. For

2011 Tony's Troll Wall book was published, the manuscript having remained on a shelf at home for almost 50 years, see publications.

For interesting historical reading, check out 'Norway, the Northern Playground' by W. C. Slingsby, with an Introduction by Tony Howard, republished by Ripping Yarns (see Publications in this website). For general travel as well as a few selected treks, try the informative 'Rough Guide to Norway', and for info on the Romsdal Mountain Festival, a week of mountain activities including trekking, climbing, and sometimes sailing and canoeing, as well as some evening talks, contact: Romsdal Fjellfestival Finally, for rafting, see: Voss Rafting, for ice climbing, click Ice Climbing

2015 The Norwegian Fjellfestival in Romsdal celebrated the 50th anniversary of the first ascents of the Troll Wall. (See Publications.) Three members of the 1965 Norwegian team were there and Rob Holt and Tony represented the English team.

2016 Honoured to have another invite to Romsdal’s Mountain Festival. We and other climbers involved in the development of climbing in Romsdal have been invited to the special climber’s event associated with the opening of the new Norwegian Mountain Museum. We will be staying at Aak where Slingsby, the great British pioneer of Norwegian climbing stayed in the 1880s. Looking forward to it!

Romsdal and the Jotunheim, see Tony's e-book, Adventures in the Northlands,

Best season For mountain activities in general is generally considered to be mid-July to late August but this can often be extended both ways plus, of course, there is the ski season, especially if you fancy learning to telemark ski, in which case, check out: www.telemarkskico.com

Getting there from UK, 2016 To reach the west coast, with its magnificent fjords and mountains, the quintessential Norway, Fjord Line had regular sailings between Newcastle and Bergen. Sadly this has stopped and there have been no passenger ferries from UK to Norway for a few years, but DFDS Seaways has a commercial ferry from Immingham to Brevik (SW of Oslo) sailing twice a week that can take passengers and vehicles, see DFDS. There are rumours that a shipping company is considering starting the Newcastle-Bergen ferry route again but no firm news. Flights, however, are not expensive.

Jotunheim From Bergen, it's a one to two day drive though magnificent scenery to the Jotunheim. Glittertind and Besseggen are usually approached from the east. Galdhopiggen and the impressive fang of Skagastoltind, first climbed by W C Slingsby, are easily accessed from the west, from Turtagro, where he used to stay. This is now a modern mountain hotel, organising tours and with an annual mountain festival. See: www.turtagro.no.

Romsdal and around Romsdal is best known for its rock climbing and mountaineering, but also with some good trekking is another day's drive further north and has numerous good campsites and hotels including Aak, where W C Slingsby also stayed in the 1800s. Aak also organises mountain tours, fishing and fjord cruises. See: www.hotelaak.no.

The trekking areas of Dovrefjell (with its musk-ox) and Rondane National Parks are one day's drive away, east of both above areas. Nordmøre and Sunnmøre, which are both climbing and trekking areas are nearby to the north and south respectively, whilst the vast Hardanger plateau is half a day east of Bergen.

100 best things to do in Norway, A really useful link if you are planning your first visit.

Norway isn't cheap. At about 10.1NKr / £1, almost everything is expensive. If you are driving there, take what you can in the vehicle and when shopping for food, buy local produce rather than imported. Fuel is similar to UK prices. There are campsites with or without hut accommodation on most main roads but you can't beat the pleasure of 'wild camping', which is allowed just about everywhere in Norway, with almost infinite opportunities by idyllic lakes and fjords alongside quiet roads.

After William Cecile Slingsby, ”Father of Norwegian Mountaineering”, Tony Howard is the foreign climber who has contributed most to mountaineering in Norway."
Dave Durkan, Norwegian Alpine Club, in his review of Tony's book, 'Troll Wall', published 2011, see Publications.

Check out: www.fjords.com
For Øyvind Heen’s excellent photos and accompanying info on Norway.

And: www.scandinavianmountains.com James Baxter on mountains in Norway

2016 Information on the new Norwegian Mountain Centre in Romsdal,