Definitely a hot country! We were there in Feb 1983, which is about as late a month as you would want to go. Nov to Feb is about it. We climbed Gebel Kassala above the Kassala oasis on the Ethiopian border and trekked across Jebel Marra in Darfur, near the Chad border.

Getting to Kassala by bus and truck was relatively easy. Crossing Sudan by train to reach Nyala in Darfur took almost six days; definitely a REAL travel experience! We also went up to Lake Nasser by train then sailed north to Egypt. On the next voyage, the boat, which was three old barges strapped together and as overcrowded as only African transport can be, set on fire and sank, apparently due to smuggled petrol. Almost everyone on board drowned or was eaten by crocodiles or, if they made it to shore, died from snake bites!

We tried to visit the Nuba Mountains, but were refused permits and believe that ethnic cleansing has been carried out in this beautiful mountain area made famous in Leni Reifenstahl's book. Oct 08 we received info from Randy Hampton who was in Nuba with a training and advisory mission to support the Sudan People's Liberation Army (SPLA), who said "It is very, very difficult to get into Sudan due to strict requirements on visa, etc. Normally, and as I write this, only those with the UN or UN agencies are granted a visa. That part of the world (northern Uganda with LRA, plus renegade SPLA Dinka and Neuer tribes) is very dangerous." Also See: Nuba Mountains and Al Jazeera's Eyes of Nuba

Similar things have been happening in Darfur since 2004. Visiting Jebel Marra is possibly still impossible due to attacks by Arab militias on the black African villages. This is a disaster approaching the scale of the Ethiopian famine in 1983/4 which forced thousands of refugees into Kassala when we were there (see below). Over in the west, there were dreadful things happening in Darfur where Jebel Marra is, which we trekked through looking for climbing areas in 1983. It seems the Arab Sudanese government was aiding an Arab tribe called the Jinjaweed to ethnically cleanse the black African villages of the area - over 2 million people became destitute refugees in Chad.  Also see Tony's article in Adventure Travel Mag, Oct 2005.

Rising above the beautiful oasis,which is reached by bus from Khartoum. Kassala itself is a great place with tribal people toting swords and spears! There are about six main summits, the rock is exfoliating granite with few cracks. Anything big enough to sit on has huge Ruppel's vultures on it (as big and fearsome as J. R. R. Tolkein's Orcs!)

We repeated the enjoyable climb to the summit of Jebel Kassala, the highest top, which was first climbed in Dec 1941 by R. A. Hodgkin and friends. They were briefly stationed at Kassala, following the Italian exodus from the area in the last war. The route info and attached topo were from the Alpine Club.

The 300m route is mostly English VS grade 4 & 5, with a peg for aid, which was still there when we did it. Without the peg, there's a bit of unprotected 5a on creaky rock. On the summit there is a legendary tree, the Tree of Life. Anyone who can climb up there and eats a leaf will live forever, or so the locals say!

We ourselves intended to do more climbing at Kassala, but the sight of hundreds of starving refugees crossing the desert from Ethiopia made climbing seem a rather futile activity in the face of real life and death survival. This was the start of the great Ethiopian famine which was broadcast to the world a year later and inspired Live Aid.

2008 Since our visit to Kassala it seems no one returned until winter 2002/3 when two French climbers added a couple of new routes - sorry, no details. We belive there is also a Polish route to the main summit. Since then are two French lads who did a couple of quality new routes (sorry, no info) and Dave Lucas has been with his Hot Rock bus also see his Expedition Consultancy link below.

2014 The Expedition Consultancy Ltd are planning a trip for next year.

We reached here from the western railhead of Nyala, not far from the Sudan border with Chad, by travelling up to the mountain villages in a truck. Nyala is 6 days by train from Khartoum.

Jebel Marra is an extinct volcano on the SE edge of the Sahara with scattered villages around its rim and excellent trekking into and through the crater with local guides, but no climbing potential. The villages have little food, so get what you can in Nyala. We lived off dates and asida (the local gourmet delight made from flour and water!) It is not known whether or not these villages are still inhabited after Arab Janjaweed militia raided the tribal areas of Darfur in summer 2004.

When we returned from Nyala, the train was three days late, then took another five days to Khartoum! Three armed Dinka soldiers from the Sudanese army (all about six feet six inches tall) threw everyone out of our carriage so they could have it. We refused to leave the train but were forced to sit in the corridor  whilst the three of them spread out across the empty seats (the others who had been in our cabin were thrown out of the train completely). Later on in the journey, they said Di could sit in the cabin with them, then tried to molest her, but without success - we were outside in the corridor, but she didn't need our help!

2014. The Dinka and Nuer are now fighting each other in Southern Sudan.

Check out the UK Foreign Office before planning your trip

2015 See Expedition Consultancy for info on their proposed trip to Kassala, in 2015 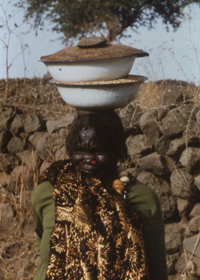 Going to market at a village on remote Jebel Marra

Visiting Sudan since we went hasn’t got any less complicated. More so in fact. See:
Sudan notes. Martin Kocsis, 20019

Visas etc In terms of travel to and from the country, UK citizens need a visa. It's relatively easy to get one although I can't remember the cost - not dissimilar to other countries. It must be noted that should one visit Sudan, that will have an impact on your ability to travel to the USA. As a result of my travels in Sudan and Afghanistan over the last 5 years I was required to apply for a 10 year US visa in person, rather than rely on the usual ESTA programme. This is an expensive business - around $240 for the visa plus a couple of days in London. If I were to visit Sudan within the lifetime of this visa, I would need to re-apply for another one.

Arrival On arrival in Khartoum, you must register as a tourist and also get a photography permit. You must also register your intention to leave Khartoum. This is simply an exercise in bureaucracy and harvesting money. Your permits will neither be denied nor ever looked at again. Nice mementos of the trip perhaps. The only negativity we encountered was in Khartoum from a guy who seemed a bit mad anyway. He had a go at us for being kafirs - and we all know what that means. The people who came to our aid were apologetic and humble, and we invited them to join us in sharing ful and pop to say thank you to them.

Travel We travelled out to Kassala by dusty bus. Easy to arrange if you turn up at the main bus station and look gormless.

Kassala We stayed at the Hipton Hotel which was reasonably clean, safe and secure. They have a rooftop terrace where breakfast and drinks can be taken and it gives marvellous views of the Taka mountains. Our intention was to climb new lines on the cliffs, but unseasonably high temperatures meant that by 1pm it was nudging 45C in the sun and by 2pm the rock was almost too hot to hold for more than a minute or two. In the end our daily routine was to get up at 4am, breakfast, get a bus out to the village at the foot of the mountains and then boulder until 1pm. At that point our only option was to retreat into the honeymooners' coffee shack for some shade and huge amounts of coffee, snacks and ice cream.
We walked up to a number of the cliffs to scope lines, but many were either too wide and steep or too blank. Some of the better looking crack lines ran out half way or less up the wall and would need anti-vulture equipment and bolting kit. The Italian route is a good expedition, but we had no idea where the French routes you mentioned might go. I'm sure there are some bolts lurking about in the area for the diligent or fortunate to find.
The town itself had that gorgeous/edgy border town feel, but we were mostly ignored. No one was really interested in us. The local police chief came to see what we were up to, and ended up having a go at bouldering. He was OK for a fat lad. We bought him coffee and a cake, because why not.
Dave Lucas has the info on the actual routes, although I don't know if he has published them anywhere.