Morocco is a wacky place! It's Africa's colourful and varied answer to Nepal and one of our favourite countries. Quick and easy to get to, in same time zone as UK and happily, not much hassle in the towns these days. Full of superb climbing and trekking areas.

(Those that we have been to, from N to S)

Chefchaouen
We had good reports from friends of Camping Azilan, but decided to stay in town. Parked up in compound below Market Area (20DH/day to Guardien).Spent first night at newly renovated Hotel Nisri. From Bab el Ain, turn left and go up until you see it to the right just before Bab Suk. 50DH/pers, hot shower inc. Nice old building around courtyard where (unfortunately) the TV was on full volume, but turned down a bit when we asked. Moved out next day and went to Hotel Bab el Ain for second night; 60DH/pers inc breakfast (promised for 8.00am but not ready until 8.45 and we wanted to have an early start). Not to worry! Supposed to have hot shower en-suite, but ours never came hot despite asking.

Beware the cafes in Place Outa el Hammam: We had lunch there on two days in different cafes. Both overcharged by about 20-30DH then made a scene when we pointed it out, saying, in one case, that the soup was ‘special’ (we hadn’t ordered ‘special’) and in the other that the extra was for the bread (cafes never charge for bread in Morocco). Such is the impact of tourism.

Climbing in Chefchouen
Very nice limestone climbing (some bolted routes) up to 60m just 10 mins walk from this old and equisite Moroccan Andalucian hillside village.See more photos.From Place Outa el Hammam, head up NE to exit at the Bab Onsar gate and take the path over the bridge towards the ruined Spanish Mosque. Not far along here there is a steep 30m cliff on the left with a few bolts in place. Just beyond, a steep gully goes up left with an attractive 100m ridge visible 100m up on its right. This provides a choice of three initial 25m pitches (about grade 4) beyond which there is no in-situ gear although we continued for another enjoyable rope length, slightly harder (maybe 5). We left a sling to abseil down to the fixed gear. Very pleasant and in the shade, useful if it’s a hot day.

Zegzel Gorges and The Grotte du Chameau
Beautiful forested mountains with some nice semi-wild unattended campsites(spoilt a bit by litter) on the approach road from Taforalt. The Grotte du Chameau was closed and didn’t seem to have been opened for ages; the Guardian at the car park didn’t have a key. Crags in one or two of valleys could be worth a closer look.

Roches Ruiniformes
East of Ifrane. Limestone towers around 10m in height. Pleasant bouldering amongst pines on the edge of if you are in the area.

To get there we drove S from Sefrou on the R503, turning W after about 25k, signed Dayet and Ifrane. Continue N of a small lake on same road, then left, signed Ifrane, until the Roches Ruiniformes can be seen rising as weird towers between pines about 1k to the right. We reached them by a rough track and spent the night there having enjoyed some very pleasant ‘bouldering’ on the 10-15 metre high limestone towers; there are climbing problems of all grades and a stop here is a pleasant interlude for anyone on their way to the rock climber’s Mecca of Todra Gorge. The rocks were marked on our Geocenter Moroccan map, 1:800,000, E of Ifrane. Just 0.5k S of them, the road meets the R707 from Ifrane to Tizi-n-Tretten and Mischliffen; the rocks are visible N of this junction, which is about 5k SE of Ifrane. The route to Tizi-n-Tretten and Mischliffen is particularly scenic, through pine and cedar forests and with skiing possible though there was insufficient snow in early Feb 07.

Taghia Canyons, Jebel Aroudane/Aioui
Up in the mountains above Beni Mellal, north of Marrakech. Superb limestone mountains with lots of routes from VS (5) and above, and lengths from 300 - 700m. Well known to the French, we went in May 1979 with info from Bernard Domenech and it's likely that we were the only Brits to climb there until October 2005, when Twid Turner & friends visited the area. Lots of potential. Not accessible in winter due to snow covered roads. Some info in HIGH 265 Dec 2004. Guidebook now out to Taghia, Montagnes Berberes by Christian Ravier with 150 climbs. Info from Club Alpine Francais for climbing on Jebel Aioui (Aroudane).

When we were there we had to camp, there was only a dirt road to Ahancal, now it's surfaced. Hire a car and go! Mules can be hired at Ahancal and there are two refuges in Taghia village below the climbs. The area is quite well known and popular though far from crowded. Most routes are equipped and the climbing is excellent.
2007 Rock Climbing Atlas series: South Western Europe & Morocco is now out, €32.50. Also info on Taghia by Kevin Thaw in Alpine Journal.
2008. Check out Dave Pickford’s article on Planet Fear: Taghia Hijinks also Andy Cave did some did some Arnaud Petit routes in Taghia that he says were mind blowing. It's possible to trek from Todra to M'Goun, see below...

M’Goun Gorge & Bou Thagrar W of Dades
After a rather epic drive from Dades via Ait M’Raw in 2007, we arrived at Bou Thagrar from where we had started our superb trek down the river in the M’Goun Gorge in 1979. in 2007, we stayed at the Hotel Le Vallee des Roses. We had a wonderful evening there with good food and music (drums and oud) and an excellent breakfast (50DH/pers, food extra at usual prices). Just south of here is:

Todra and Tamtatoucht
There are now well over 200 routes at Todra, some say 400, from grade 4 to 8, 25m to 300m, almost all fully equipped with bolts and lower-offs, making it the most well developed and popular crag in North Africa. The rock is generally superb.

Camping la Solliel, on the road to Todra is very good campsite with vehicle plug-ins, hot showers, wash facilities and good restaurant, 65DH for 3. Hotel le Mansour at the entrance to the gorge has climbing topos and can contact Hassan Mouhajir, an amiable climbing guide who speaks English, French etc. You can also contact him at nearby Hotel Vallee.

The road through the gorge was washed out in Feb 07 so we had to drive part of the first 10k in the river or on sections of the road severely undercut. Worth the journey, if only to spend the night in one of the upper villages in a Ladakhi type landscape with icy winds, snowy tops and friendly people. We stayed at the upper end of Tamtatoucht in the family home of Auberge Tafouyt; very friendly, 150DH for 3 inc overnight camping, eve meal, breakfast and a guided tour of the village. We were entertained in the evening with drums and oud. Recommended.

The Dades Gorge
Located over the Atlas Mtns, E of Marrakech and not far from Todra. We stayed in Auberge du Gorge – Chez Yousef; 45DH for 3 & campervan. Good restaurant. The gorges higher up are worth seeing as are the rocks of Doigt des Sanges (Human Body Rocks). These offer a very enjoyable short canyon trek (see notes on walk, Rough Guide pg 542)which is visible in part from the big car park and view point across the river. To reach the canyon, descend to the gardens and follow paths upstream to reach a footbridge. Cross this and follow the path towards the village then turn right along the outside edge of the gardens and continue until the gardens end and the path returns to the riverside. Just beyond, a canyon cuts back into the rocks, passing under jammed boulders (this point can be seen from the car park). Follow the canyon, which passes under more rocks and becomes increasingly narrow until it becomes little more than body width. Climb up and out to the left onto a low shoulder and continue for a short while in a similar direction, up a ridge between the canyon and a little valley. When a path is seen on the opposite side of the valley, cross over and follow it back down to the village, returning over the bridge. The rocks would be a bizarre place to climb but are conglomerate and in the short time we were there we didn't spot anything other than wide cracks and bald slabs, but you never know...

Jebel Toubkal, 4167m
The highest summit in North Africa and easily accessible from Marrakech. Great for winter climbing with other nearby peaks and Tazarhart Plateau. Also year round trekking. Lots of local guides etc, due to popularity. We were there in winter 1962 / 3, climbing a rock ridge on the West Face to the upper snow ridge and dome, when there was no one! We have received the following links on guiding for trekking, climbing and canyoning and Berber Experience which may be of use:Mr Mohamed Bouinbaden based in Imlil, under Toubkal, but covering the whole Atlas.

Tafraout
Down south in the Anti Atlas on the edge of the Sahara. Beautiful oasis with Joshua Tree style granite boulders (some with fixed gear). Also numerous mountain and canyon cliffs within easy reach, up to 500m.

A lot of new routes done in the 1990s and still going on, initially by Trevor Jones, Les Brown, Joe Brown and friends. We were there well before that in winter 1962 / 3, after Toubkal, bouldering and enjoying the sun and laid back atmosphere! Also again in 2000. Route info in the Hotel Les Amandiers above the village. Easily accessible from Agadir. (Hire a car.) Guidebook: Climbing in the Moroccan Anti-Atlas. Clive Davies. Cicerone Press. 2004. Also see HIGH mag, Aug 2004. There is also now another guide out to the north side of Jebel el Kest, the main summit just north of Tafraout. And see Climb-Tafraoute for up to date info on routes north and south of Jebel el Kest.

Sea cliffs we did some bouldering on the small cliffs along the coast near Sidi Ifni, south of the Sous Massa National Park, in the south of Morocco. (Sous Massa was where we worked on the huge crumbling sea cliffs, creating nesting sites for the highly endangered Moroccan Bald Ibis). For info on this and photos see "Bald Ibis Project" 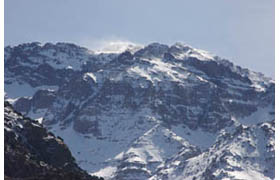 Jebel Toubkal, 4168m, the highest mountain in North Africa, which we climbed in the winter of 1962/3 before heading south for some sun and warmth and discovering Tafraoute, now a famous climbing area. 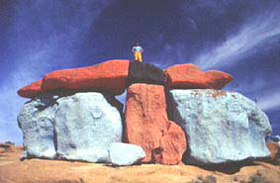 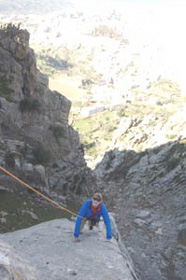