The following are some of the local people working as guides in Wadi Rum. They are mostly from the Zalabia faction of the Huweitat Bedouin and live in Rum village in the heart of their tribal territory. It is their historic tribal land and they are consequently the people who know the area best.Wadi Rum should not be confused with nearby Disi. If visiting Rum, use a Rum guide.

We are happy to point out that the first people to welcome us to Rum on behalf of the Zalabia Bedouin were the family of Sheikh Atieeq. His sons Eid, Defallah, Mazied and Sabbah have all assisted with our explorations since our first visit in 1984. Defallah was also responsible for the discovery of Jebel um Adaami as Jordan's highest mountain, but sadly died in 2011, see obituary. His brothers and sons continue to work as guides.
Finally we apologise to Zedan who is always last on our alphabetical list!

Wadi Rum trekking and safari companies, guides and tourist camp operators (those who are also climbing and mountain guides are prefixed with an asterisk).

HORSE TREKKING
Saleem Ali, Jordan Tracks mob: 07 9529 8046
Working with Wilf Colonna, Atallah Sweilhin specialises in horses but also does camel trekking: tel 00962 32033508 mob: 00962 77428449
Wilf Colonna is a French Mountain Guide who we invited to Rum in 1985. He was the first person to organise horse treks in Rum and still does so. Wilf also sometimes works with Susan Shinaco who has stables at the Bait Ali camp near Shakriyah, just before the reaching the Rum - Disi junction and Visitor Centre.

Any Bedouin Guides from Wadi Rum who have been inadvertently missed from this list or whose contact details are wrong are asked to contact us with information.

Adventure Tour Operators based in Amman
Some specialist adventure tour operators based in and around Amman organise trekking, climbing and safari trips in Rum in cooperation with Rum Guides, those we know personally are:
Experience Jordan
Terhaal
Tropical Deserts

Prices It's worth pointing out that prices in Jordan are increasing rapidly as elsewhere in the world, and not all websites are kept up to date. To save confusion later, make a clear deal to avoid annoyances afterwards. 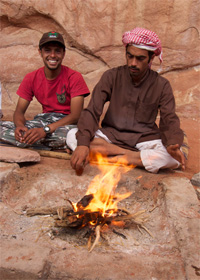 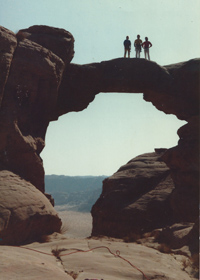 The Rock Bridge of Jebel Burdah Unknown to the outside world until Defallah and Sabbah Atieq showed it to us in 1984, when this photo was taken. Reaching it is now deservedly one of the most popular scrambles. Go with a Bedouin guide from Wadi Rum for a great day out involving a nice desert drive and a great climb.