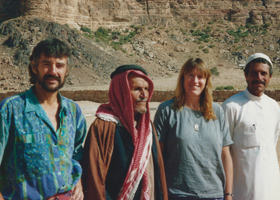 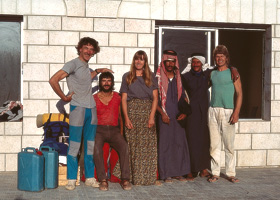 Above left: Other than the Bedouin, the first climbers in Wadi Rum, 1984:
Left to right: Al Baker, Tony Howard, Di Taylor, Defallah and Sabbah Atieq and Mick Shaw
Above right: Tony & Di with Sheikh Atieq and his son, Sabbah

We discovered Wadi Rum in 1984 and were initially welcomed by Sheikh Atieq and his family. They and the other Bedouin of Rum have continued to support our annual visits. Their Bedouin hunting routes are superb, considered as "amongst the worlds best mountain adventures". Rum itself is considered to be "amongst the world's best desert climbing areas". What more could you want. We always said we would never go to the same place twice, but we've been to Rum every year since 1984. If you climb or trek or simply want to spend some time with the Bedouin, this is the place to go! There are over 500 climbs to choose from with info in our  guides and in the New Routes book at the Rest House in the village. And some more info here:

In Nov 2006, James Garrett from the USA and Res von Känel from Switzerland climbed a route on Jebel Kharaz to the left of, and minutes from, the Kharaz Rock Bridge (see R118 and the section ‘North of Rum’ in the new Jordan guide); generous and friendly Bedouin at the base, offering tea all the time!

Amidst Difficulty lies Opportunity*** 6a
This 4 pitch sandstone route climbs the obvious corner on off-widths reducing to hands then fingers followed by some face climbing pitches; well protected with bolts at the very beginning protecting the off-width, up to a pleasant right facing corner 5a, and the slab at the top.

New sports & trad climbs in Rum See Climbing Jordan for numerous new route updates including some single pitch. The authors stress that bolts should not spread insidiously onto traditional lines. Controversially, four bolt protected sport climbs (grades 5 to 6a) were added on Jebel M’Zaygeh in Wadi um Ishrin. Bolted routes are banned in the Rum Protected Area (National Park). In defence, the first ascentionists say the ‘glue-bolts’ are not visible, having no shiny hangers, and the routes are excellent and a good introduction to Rum rock – though after the safety of the bolts, anyone moving on from there to the traditional routes of Rum is likely to find a cool head at least as much of a requirement as technical ability. Writing in the New Routes Book in 2004, Andrew Walker says “save those scary, unprotected but beautiful lines for climbers with the ability to ‘run it out’ and create bold, committing routes in the future”. Talking of good style, numerous routes were added in good style in 2003, with grades up to Fr7a. In Nov 03 (a busy month) Philip Brass and A. Busatta also re-equipped the belays on the now classic Star of Abu Judaidah EDinf 6a in Barrah Canyon and replaced the abseil pegs of Jebel Maghrar’s Desert Rats , TD 6b, with bolts as they were falling out.

New Rum mountain traverses In spring 2002, Precht and Brochmeyer did a monster three day traverse of the south end of Jebel um Ishrin, from Draif al Muragh to Kharazeh, almost always on Extreme rock - a powerful effort!
Together with Talal Awad (Bedouin guide), Gilles Rappeneau discovered 'The Missing Link' which climbers have searched for since 1984 - the Bedouin way across The Great Siq on Jebel Rum. Later, in October 2002, Talal, Wilf Colonna, Patrick Gabarrou and friends made the first non-Bedouin South - North Traverse of Jebel Rum. They went down at Al Thalamiyyah; it remained only to do the section to Abu Doud, which is very complicated, and the section Abu Doud to Wadi Leyyah to complete the full crossing South-North. That was done by Talal Awad, Alban Busatta and Gilles in 2005 in 9hrs 30mins.
Spring 2014, Wilf Colonna and Amjad Shahrour did a full length traverse of Jebel Rum from the far north, all the way to the south, including reversing his 2002 S-N route. Wilf says it's a superb trip, one of his best mountain experiences anywhere.

2003 Gilles Rappeneau and local Bedouin, Talal Awad, have explored around thirty traditional Bedouin hunting routes in Rum (grades from Fr3 to 5). Gilles has produced a small topo booklet to these superb adventure climbs - one copy is in the Rum Rest House and others are available from Talal. See Gilles Rappeneau's Bedouin routes.

2004 The Khamsin (fifty day wind) blew much of Easter 2004, bringing the worst sandstorm in living memory just as we were emerging from Rakabat Canyon into Wadi Rum. Big ‘clouds’ of Dolomitic thunderstorm proportions devoured Jebel um Ishrin and the air filled with sand as the valley and Jebel Rum disappeared. Navigating to the village with zero vis and faces scoured by stinging sand particles was a minor epic. Next morning as the dust settled we walked over to the Rest House to hear other tales of survival, one team having just topped out on Pillar of Wisdom when the storm hit, concealing everything except the summits of Rum and Um Ishrin. They didn’t make it back until the morning!

2007 John and Anne Arran did some excellent repeats and first ascents. Info on their website.

The Wadi Rum Visitor Centre Visitors to Rum have to pay 2JD (£2) entrance fee when they arrive at the valley entrance. If you have no transport, a vehicle has to be hired to reach Rum. All Bedouin guides including those from Rum pick up tourists at the Centre. In Rum itself, visitor camping is still allowed at the Rest House. Guides and vehicles can still be arranged in the village. Some Bedouin have homestays in the village or and Tourist Camps in the Desert.

Rescue and Rum Guides Visitors to Wadi Rum are advised to have a travel insurance that includes $10,000 for helicopter rescue. This also applies if they are climbing with Bedouin guides as the guides have no professional insurance, none being available at present.

2016 Good article on Rum climbing with info and route recommendations by Nancy Bouchard. 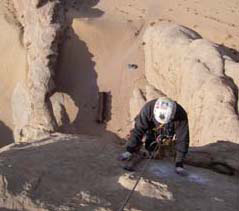 1st ascent of 'Amidst Difficulty lies Opportunity' (photo James Garrett). Sunlight shines though the arch of the Rock Bridge of Kharaz below the climb. 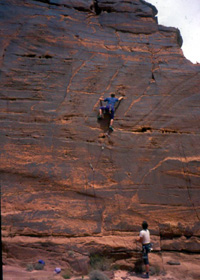 Mick Shaw on 1st ascent of 'Love at First Feel', Jebel um Ejil. One of the many enjoyable short climbs to be found in and around Rakabat Canyon.