Mohammed Musa On our arrival in Rum in the spring of 1989 we were given the terrible news that Mohammed Musa had been tragically killed in a car accident at the junction of the Wadi Rum road with the Desert Highway. Mohammed was one of the lBedouin we came to know well on our first visit to Rum in 1984 and he became a close friend, always jolly and ready for a joke. Two of his sons, Salim and Eid, passed our camp every day, going to and from school on their camels.  Mohammed, like all the Bedouin of his generation, was very knowledgeable about desert life. In 1985, he was the guide for a British Army expedition travelling with camels from Rum to Azraq and back via Petra; the story is told in Charles Blackmore’s book ‘In the Footsteps of Lawrence of Arabia’. Writing about an evening in Mohammed’s tent, he says, “As he methodically prepares the coffee, I realise Mohammed knows few of the conveniences of the Western world. He is a desert nomad, his way of life scarcely remains in the modern world and its preservation inspires a wonderful sense of stability and integrity”.

We always looked for Mohammed’s tent beneath Jebel um Ishrin when we arrived in Rum each year – it seemed a permanent fixture in the valley and we made sure he was amongst the first people we met on our arrival. Nights spent in his camp were always wonderful experiences, sharing meals with his family, chatting about life in Rum, his hunting exploits in the mountains, and listening to Mohammed singing and playing the rababa. He was a loveable rogue, in the very best sense of the word, with an irrepressible twinkle in his eye and, for us, an inseparable part of Rum, we will miss him greatly. The valley seems empty without his tent.  In memory of him, we climbed some routes in 1989 on a granite slab at the foot of the Um Ishrin massif not far from his camp, and called it Musa’s Slab. Together with Sabbah Atieq, we also climbed one of the great Bedouin hunting routes that Mohammed had told us about, naming it Mohammed Musa’s Route in his honour. It begins not far from where his tent used to be and passes through the heart of Jebel um Ishrin - we have fond memories of Mohammed’s stories of this long, complex and truly adventurous climb – the only one to traverse the massif.  Our sympathy goes out to his family.

Sheikh Atieeq, also known as Haj Atieeq, died on Feb 19, 2001, well into his nineties. His was the first family we met in Wadi Rum in 1984. They were the first to make us welcome into their desert camps before the village really existed. He fully supported our explorations for climbing and trekking and saw their potential in bringing income to what was then a poor area. A visit to his camp was always first on our list in future years and he remained a close friend, making us feel part of his family.

His sons continue to be our 'brothers' and close friends of the ever-increasing climbing community. Sabbah Atieeq has twice visited the UK on Mountain Guiding courses and as our guest, and wquickly became the most experienced of Rum's new breed of Mountain and Desert Guides. Three of the other sons, Defallah, Eid and Mazied are first class desert guides. It was Defallah and Sabbah that showed us the Rock Bridge of Burdah back in 1984, and wondered if it might be of interest! It was also Defallah that discovered Jordan's highest mountain, Jebel um Adaami. With these two finds alone they made a massive contribution to the economy of the Rum community. It was Eid that showed us the superb fossils in Wadi Salaada, one of which became a gift for Queen Noor and now sits in the Palace garden. Mazied became a respected guide for members of the Jordanian Royal family and for Harrow School where King Hussein was educated.

Sheikh Atieeq was, for us, a link with 'old' Rum and the true Bedouin traditions; he was born before the Arab Revolt and the time of Lawrence. When we first met him out at his desert camp under Jebel Raqa, he was in his seventies and was wrestling a camel to the floor, to treat a skin-wound. He was a man of great strength, good humour and, above all, of dignity, a highly respected elder of the Zalabia Bedouin, a faction of the Huweitat.  We are proud to have known him - the climbing community (and therefore Jordan's desert tourism) owes him and his family - and extended tribal family - an untold debt. He deserves our tribute and we treasure our memories.

Hammad Hamdan  It is with great sadness that we heard today, 3. 12. 2009. about the sudden and unexpected death of Hammad Hamdan, a Zalabia Bedouin from Wadi Rum, and son of Sheikh Hamdan who, in 1952, became the first Bedouin to guide Europeans up Jebel Rum. Hammad himself was also a Mountain Guide, initially for the Jordanian Army in which he was a paratrooper. Together with the late Sheikh Atieq, he was one of the people to welcome us to Wadi Rum on our first visit in 1984 and to make us feel at home.  Sitting by the fire with Hammad and listening to his colourful, amusing and exciting descriptions of the many Bedouin climbs in Wadi Rum was one of the reasons our first visit to the area to explore its climbing potential was so successful and, consequently, why Wadi Rum is so successful today as an adventure tourism destination. Jordan and the international climbing fraternity owe him and others like him a debt of recognition.

Hammad’s Route on Jebel Rum, like his father route, Sheikh Hamdan’s Route, is now world famous amongst climbers, the combination of the two making the classic traverse of the mountain, though where they climbed without equipment, today’s climbers need ropes and other specialist items, such is the skill and boldness of the Bedouin, alone on the mountain. ‘Hammad’s tree’, a dead tree wedged in a crack by Hammad to make it possible to climb a particularly difficult piece of rock, has now been thankfully grasped by hundreds of people following in his footsteps.

Our friendship with Hammad and his family has continued over the years since 1984. He was a well-built man, somehow he seemed as rock-solid and permanent as the mountains we all shared a common love for. He epitomised all that is good about the Bedouin people, being warm-hearted, caring, generous and having a wonderful sense of humour. We are proud to have known him. His youngest son, Mohammed, is proudly carrying on his family’s tradition, and is one of Rum’s new breed of Mountain Guides.  We send our deepest sympathy to him and all Hammad’s family and friends.

Defallah Atieq, son of Sheikh Atieq, very sadly died in mid June 2011. He was a key man in the discovery and development of climbing and trekking tourism in Wadi Rum. He was also a very special person, a great friend, a proud family man, and highly respected in the village.

When we first went to Jordan in 1984 people at the Tourism Ministry in Amman advised us not to go into Wadi Rum without someone to introduce us to the Bedouin but we went anyway. Defallah was the first person to come to meet us. He was then a young man, in his early twenties, with swashbuckling good looks, long black hair, and a knife in his belt, the epitome of the classic Bedouin, straight from the pages of Thesiger and Lawrence. He asked why we had come to Rum and invited us out to the desert camp of his father, Sheikh Atieq, where we were made welcome in true Bedouin style and invited to stay the night. Grinning, he gave us some good Bedouin advice, “If you are hard with us, we will break you. If you are soft with us, we will squeeze you. If you are straight, you will be our friends.” And we have been friends ever since.

With their father’s approval Defallah and his brothers offered to help us in our planned exploration of Rum’s climbing and trekking potential and welcomed the suggestion that others might come to enjoy Rum’s spectacular mountains and deserts. Defallah told us that they had climbed most summits whilst hunting ibex or collecting herbs. They wondered why we had brought climbing equipment and ropes when they climbed alone and with nothing, sometimes soloing (as we were soon to discover) up to grade 5+ moves whilst high in the mountains.

In the first weeks of our visit, Defallah and his brothers took us around the whole area, pointing out their hunting routes and naming the mountains and key features. They were fully supportive of us writing a guidebook and looked forward to welcoming others into their homeland. Over the following years, based on their input, Rum became known as “the world’s best desert climbing area”, and the Bedouin hunting routes were given the accolade of “amongst the world’s best mountain adventures”.

None of this would have happened without the approval and help of Defallah and his family. It was Defallah who took us out to see the now famous Rock Bridge of Burdah in 1984. He wondered “if it might be of interest”. A few years later he identified Jebel um Adaami as Jordan’s highest summit climbing it with us and his brother, Sabbah Atieq, now a respected mountain guide. Reaching the tops of these mountains is now on every climber's and trekker’s itinerary, as is doing a Bedouin route.

We have been welcomed into Defallah’s home every year since we first met and even though he was ill when we last met in April, it was a great shock to receive the following email from Wadi Rum about his untimely death two months later: “Defallah was very important to many people. Hundreds have come from the villages, from Amman and Saudi. He has been sick for a long time with stomach problems but he never put himself first, always feeling responsible for others. He died with his family around him, at home and in peace, he knew it for a long time and he had prepared himself. So many people have come, sons, brothers, cousins, nephews, friends, a true Bedouin family, his sons stayed with him all night. We will mourn for three days. He was a special person to so many… but he is with Allah now and in peace.”
We, and all those who have visited, climbed or trekked in Rum are indebted to him. 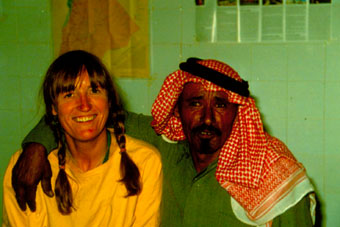 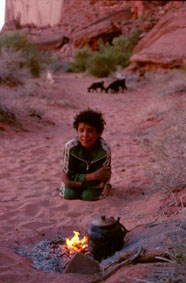 Above
Mohmmed Musa with Di Taylor.
Mohammed's son, Khidr, tragically killed in a car accident some years after his father's death. 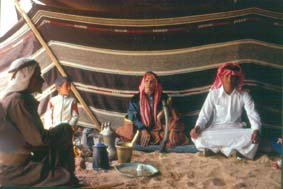 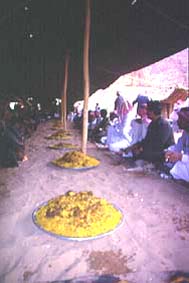 Above
Sheikh Atieq in his desert camp, and the magnificent memorial feast held in his honour that we attended 40 days after his death 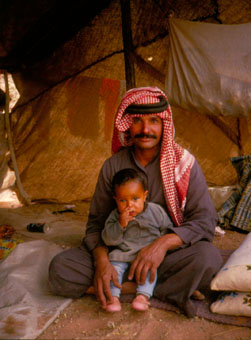 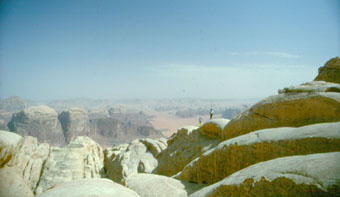 Above
Hammad Hamdan with one of his sons, Mohammad, now a mountain guide literally following in his father and grandfather's footsteps. His grandfather was Sheikh Hamdan who we also knew. The combination of Sheikh Hamdan's route with Hammad's Route makes the classic traverse of Jebel Rum. Hammad's route is probably the most important of the Bedouin routes on Jebel Rum being the key to the East Face and leading to the beautiful but complex summit domes - see photo. 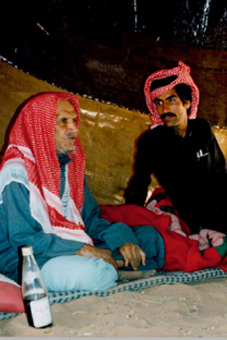 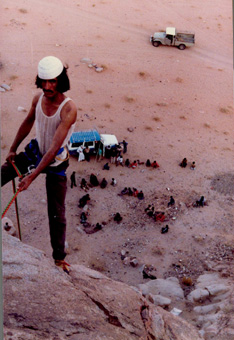 Above
Defallah with his father, Sheikh Atieq. They were the first to welcome us to Wadi Rum in 1984, and Defallah was the first to abseil with us on the cliffs near the village school.  He continued to be a good and supportive friend to us and to play an important and respected role in Wadi Rum until his untimely death.