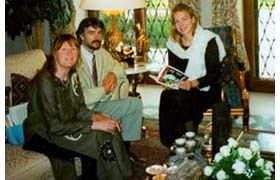 Jordan has to be our favourite Middle East Country: small enough to get around with ease, wonderfully friendly people and a haven of peace despite frequent turmoil in neighbouring countries. We have been every year since we first discovered Wadi Rum, it's climbing potential and it's hospitable Bedouin people in 1984.

Jordan also has a wealth of human history going back millennia: ancient man, Nabataeans, Greeks, Romans, Crusaders, Circassian and other refugees from Soviet Russia and Turkey a hundred years ago, and of course many Palestinians and our old friends the Bedouin extolled by 'Lawrence of Arabia'.

In additional to unique archaeological sites, it also offers a surprisingly varied terrain for adventure tourism: the forested hills of the north, the great gashes of the canyons leading to the Dead Sea - the lowest point on earth, the wild hills and valleys around Dana and Petra, the stunning, colourful mountains and desert of Rum and the coastal resort of Aqaba with its excellent diving in the Red Sea.

That's the good news. Not so good is that the Entry Visa price just doubled on April 1 2014 to 40JD (approx £35) which, together with the astronomical Day Ticket for Petra at 50JD makes Jordan a very expensive country to visit. Luckily the hummus is cheap and we still have the freedom of the hills.

Guidebooks to Jordan by n.o.m.a.d.s.

All above books by Tony Howard and Di Taylor. We also contributed the original trekking notes for the Rough Guide to Jordan as well as info for the Lonely Planet and Dorling Kindersley guides.

The following article covers much of our climbing and trekking explorations in Jordan including the Jordan Trail.

Al Ayoun & The Northern Hills
Almost all the walks and treks are on the hills above the Jordan Valley which, even here over 300km north of Aqaba, is still below sea level! Beautiful one to 7 day treks between historical sites such as Greek Um Qais and Pella and on to Al Ayoun villages and the Islamic castle of Ajlun at 1000m. There are also a few single pitch climbs on good quality Mediterranean style limestone and a couple of caves have been found. There is an RSCN Nature Reserve near Ajlun. Others are being opened in the Jordan Valley and Yarmuk areas.

Dead Sea Hills
Excellent canyoning and canyon treks above the Dead Sea, From Madaba just south of Amman all the way to Wadi Hasa just south of Kerak, including the Mujib Reserve of the RSCN (permission required). Some parts of the Reserve are permanently closed as Protected Areas (despite what others may tell you).

Tafileh, Dana & Petra Area
Still much to be explored south of Wadi Hasa and west of Taflileh, but south of there through the Shara Mountains from Dana to Petra and on south to Mas'uda and Roman Humeimah there are some good canyons and it's a great trekking area with routes from one day to one week. Again, some parts of Dana RSCN Reserve are closed and permission is required to trek there. There is some climbing near both Dana and Petra and trekking guides are available in both areas. Beyond is:

Wadi Rum
Rum (and much of Jordan) was initially explored by us and our friends annually from 1984 onwards. It is now known as "one of the world's best desert climbing areas", and there are around 500 rock climbs at all grades from single pitch (trad and sport) to muliti-pitch big walls and superb mountain traverses following world famous:

The Aqaba mountains
The road to Aqaba winds down between these harsh-looking mountains, but there are a few treks through their canyons, as well as some scrambles to the main tops (mostly done by our friend Brian Hodgkinson). The treks include the last day of The Jordan Trail. It's a nice route through a part of Jordan never before visited by outsiders. All these mountains would be worth a closer look, but it's hot down there, so winter months are best.

Other Info
For info relevant to travel in Jordan and Wadi Rum see:Jordan Jubilee , Jordan Tourism and check out Mathew Teller's blog (Mathew is the author of Rough Guide to Jordan). Also see Climbing Jordan, The Desert Guides and Lizard Life for climbing and other info, and Itai Haviv's book to Trekking and Canyoning in the Jordanian Dead Sea Rift.

Final Words
"Queen Rania joins me in conveying to you both our thanks...Your support in introducing adventure tourism in Jordan is greatly appreciated. Wishing you continued progress and prosperity with your work, please accept my best regards"
HM King Abdullah II ibn Al Hussein

“You are doing a great job which is very much appreciated by all of us. Thanks a million.”
H. E. Maha Khatib, Minister of Tourism, Jordan.

“You guys are the best thing that happened to 9 million Jordanians and they don't know it but I do. Thank you from me, my wife and the Jordanian outdoor guys, even the ones that don't know of you yet.”
Hakim Tamimi, Jordan Tourism Board

"We as small adventure community, would like to thank Tony Howard and Di Taylor for their great efforts making our country an adventure destination on the world adventure map since 1980's."
Murad Arslan, Jordan Hiking Society

"Thanks for everything you have both done for Jordan.YOU are truly amazing. You have inspired and delighted everyone who met you and spent time with you. Love you truly and dearly"
H. E. Lina Annab, Minister of Tourism, Jordan, 2017

Photos Di & Tony with H.M. Queen Noor who sponsored our research for our guidebook to Jordan - Walks, Treks, Caves, Climbs & Canyons to aid the economy of the smaller and more remote villages. She also kindly assisted with the sponsorship of three Bedouin from Wadi Rum who visited England for training as Mountain Guides, including Sabbah Eid, a Wadi Rum Bedouin Guide, seen here on the climbing wall at Plas y Brenin, Britain's National Outdoor Centre in Wales.

For an overview of Middle East Trails including the Jordan Trail, Lebanon Mountain Trail, Sinai Trail, The Masar Ibrahim Al-Khalil (much of it following the Nativity Trail) plus treks in Turkey, see Walk the Masar

"Thank you for your insights into Jordan and for sharing your highlights and knowledge, particularly of the landscape, varied scenery, energetic activities and unique experiences that Jordan has to offer! It was a very informative and interesting evening and very enjoyable for all attendees."
Royal Geographical Society, 'Discovering Jordan'

Adventure Tour Operators based in Amman
Some specialist adventure tour operators based in and around Amman organise trekking, climbing and safari trips in Rum in cooperation with Rum Guides, those we know personally are:
Experience Jordan
Terhaal
Tropical Desert
Explore Jordan

I'm still using your Jordan guidebooks. The incredible work and love that you two have brought to the project has benefited so many of us.
Brent Fullerton, International educator and amateur adventurer

The full story of the history of adventure tourism in Jordan
Adv Tourism Jordan3.pdf

"Tony and Di you are our inspiration, your footsteps made wonderful paths that we are following, you gave us and Jordan more than any words can describe and more than anyone could imagine. Sincere thank you."