You are here: Home > Countries > Jordan > The Jordan Trail

THE JORDAN TRAIL
The Jordan Trail is a 650km walking (and in the future possibly a biking and maybe horse-riding) trail connecting the length of the country from Um Qais in the north to Aqaba and the Red Sea in the south. It traverses the diverse landscapes and vistas of the country from the rolling wooded hills of the north, the rugged wadis & cliffs overlooking the Jordan Rift valley, the great canyons above the salty waters of the Dead Sea, the purple and pink sandstones of the Petra mountains, the dramatic sands and towering Jebels in Wadi Rum, to the colourfully striated igneous mountains of Aqaba and the corals of the Red Sea.
It is also a journey through the layers of history in Jordan – Edomite, Nabataean, Roman, Christian, Islamic and contemporary. An encounter with the peoples of Jordan – Fellahin, Bedu, villagers, townspeople, Moslems, Christians, Chechens, Circasians, Gypsy, and their cultures, traditions, and cuisine. The aim of the trail is to invite Jordanians and tourists to healthy recreation; to get out walking and to learn about, enjoy and appreciate Jordan in all its beauty and diversity; and to open opportunities for enriching encounters with peoples, cultures and nature.

1990s We initiated the idea of a country length trail whilst working on the 1st edition of our Jordan Walks & Treks book.

2000-2011 We added more treks whilst working on the 2nd edition of Jordan Walks & Treks and, at the invitation of Abraham Path, on our Al Ayoun Walks & Treks book.

2012/13 The Jordan Trail concept was taken up by the increasing number of Jordanians who have discovered their wonderful wild outdoors and are exploring the route south from Um Qais to the Dead Sea. Murad Arslan of Jordan Hiking Society and Hakim Tamimi of Tropical Deserts contributed much of this, as did we, together with Experience Jordan, as well as checking alternative routes from Um Qais to Ajloun, based on our Al Ayoun guidebook.

2014 An article of Tony's  about the trail was published in March 2014 TGO magazine. Also in March, Trek & Mountain mag ran a story of Tony's about Discovering Jordan including mention of the trail in addition to scrambles, climbs, treks and canyons. Jordanian companies such as Tropical Desert, Experience Jordan continue to be actively involved with trail development and we are helping out every spring.
This article here covers our Jordan climbing and trekking explorations including the Jordan Trail.

Climbing discovery Whilst exploring the way for the Trail, we found a new limestone cliff  in Wadi Hasa, almost 2km long and around 20m high with huge scope for both trad and sport routes, plus some excellent boulders.
See: Tor_al_Taboun__the_longest_cliff_in_Jordan.pdf

March/April and Oct/Nov 2014  With support from Mark Khano and Amjad Shahrour of Experience Jordan, and Osama Cori of Explore Jordan, we had a great 3 months checking and contributing to the rest of the trail from Ajloun Castle past the King Talal Dam and Fuheis and on across the wonderful Dead Sea canyons to Kerak and Ma'tan. Having previously walked or travelled by 4WD and camel along the route from Ma'tan to Dana to Petra and Rum (see our Jordan Walks & Treks book), we picked up the trail again in Rum and were very happy to find a great off-road trek all the way to the Red Sea. There is still work to do uploading GPS info onto the web and identifying homestays and campsites etc, but it's a great trail, the longest in the Arab world, probably best done in around 40 days. See The Jordan Trail

April 2016 The Trail has now been officially approved by Jordan's Tourism Board and Ministry enabling funding from USAID to support the newly formed Jordan Trail Association and their work on the trail website, waymarking, homestay development, guide training etc. Here is an email from Muna Haddad, a member of the Jordan Trail Association sent after the official signing ceremony:

"We missed you both today at the signing ceremony with USAID. We were thinking of you and can't wait to have you back here to celebrate this dream of ours coming together. You are both the catalysts behind this and were mentioned today in the speeches. The Tourism Minister gave his full support. Thank you for all the amazing things you have done for Jordan."

June 2016 Issue 58 Trek and Mountain mag came out in 2015 with our Jordan Trail story in, "the new middle eastern super-route". Then in June 2016 this trail announcement was published on their website

Sept 2016. See photo opposite. We received a surprise invite to visit HM Queen Noor who thanked us for our involvement in the creation and development of Jordan’s adventure tourism and the Jordan Trail. However, we were pleased to point out that, were it not for her much appreciated and essential help in the 1990s, our guidebooks to trekking in Jordan could never been written and, as a Jordanian friend subsequently told us, it was through those books that they “discovered the beauty of their country’s wild places and the many adventures they offer”. They soon joined us on our explorations, forming the Jordan Trail Association. Without them and their enthusiasm, our hopes of creating a ‘Jordan Trail’ based on the treks we had discovered during those early years could not have come to fruition. All of which is now benefiting Jordan’s adventure tourism greatly as well as contributing to its promotion and the economic benefit of the rural communities through which the trail passes.

Jordan Trail, spring 2017 was the official inaugural through walk, to which we were invited and received an award. See the Story of The Through Walk 2017.

Jordan Trail, Oct 2018 the Jordan Trail Association received an award for promoting the trail and having an impact of $6 million on the 52 villages along the trail. Our 20 year dream certainly came true - in fact our dream was greatly exceeded thanks to the work of the JTA!

We would like to thank PHD and RAB for their generous sponsorship of lightweight clothing and rucksacks, all ideal for use on the trail. 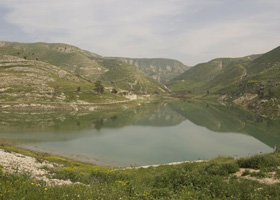 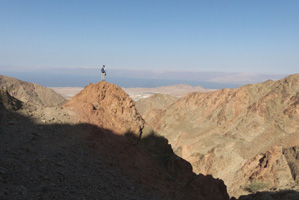 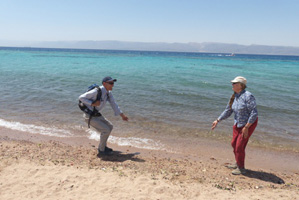 The Jordan Trail including the first view of the Red Sea from the Aqaba Mountains, and Mark of Experience Jordan with Di at the end of the trail after 5 weeks of exploration. 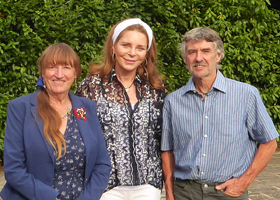 For up to date news click on The Jordan Trail

See the Cicerone Press Blog and  Jordan Trail History to discover how the trail was originally conceived by us, then explored over a period of twenty years and finally officially approved. It's now open, welcome to The Trail!

Also news on USAID and the Jordan Trail

“Thanks for all you've done to make the trail a reality. It's been a privilege to see it all come together, and there's no doubt that your contributions and pioneering has had a major influence on what it's become.”
David Landis, guidebook author and cofounder of the Jesus Trail