New climbs and treks and some cave exploration Info was received just after the publisher's deadline for the 2nd edition of our Jordan - Walks, Treks, Caves, Climbs & Canyons book published in July 2008. Plus we have added more routes on our ongoing spring visits, and some GPS points. We include some info here (trekking info is minimal, due to space limitations). Any info received will be saved for future editions. Also see Climbing Jordan and Tropical Deserts for climbing topos and Experience Jordan for guided walks.

For homestays in the Pella - Al Ayoun area download: Homestays2_N_Jordan.pdf

Pella Area
First, and most important, the mobile phone number given in the book for the Countryside Hotel, Pella, run by Deeb Hussein, is incorrect. The correct number is: 079 557 4145. Lunch is also available for walkers at 7.5JD. Email

Lots of new developments at Al Ayoun, some in our Al Ayoun guide (see Publications) but many more routes since including numerous sports climbs in Al Ayoun and elsewhere in Jordan (see above links, and pdf at bottom of this page).

Following our discovery of the Al Ayoun cliffs, Hakim of Tropical Deserts organised the equipping of sports climbs there. He said (Sept 2013), "8 top climbers 2000 bolts 2000 hangers 5 drills camera crews and tons of ropes and gear will stay for 6 days in the Al Ayoun homestays of Orjan in North Jordan, sponsored by Fixe Hardware the Catalan Climbing Federation Orange telecom with Tropical Desert and others." They have now installed over 150 climbing routes in the cliffs of Iraq al Dub near Baoun and maybe some at Al Warda al Hamra – see the Al Ayoun guidebook in our webpage Publications, making it the biggest single sport climbing area in the Middle East.

Al Ayoun
We were invited to join the Abraham Path Initiative in spring 2009, to further develop the Ayoun area (just north of Ajloun) to enhance the district's potential for eco and adventure tourism. Assisted by the local people who are very keen to promote this quiet and beautiful part of Jordan, we spent a wonderful three weeks doing exactly that and in the process made many new friends in the villages as well as discovering numerous unique treks, some excellent limestone cliffs, and a pothole.  Most treks are single day, some are 2 days and take the walker down though various eco-systems, from Mediterranean-climate hilltop villages to Pella and the sub-tropical Jordan valley. A few are in thickly forested valleys, a truly special experience in Jordan. Most importantly, visitors have the opportunity to meet and stay with the local people, and to hire them as guides should they wish - always worthwhile for their good company and local knowledge.

We were there again in spring 2010-11 as guests of the Ayoun Community and API, completing work on a guidebook to Walks, Treks, Climbs and Caves in Al Ayoun, published in 2012, sponsored by Ruwwad and the Community (see Publications). If you would like to experience some of the new treks and climbs and enjoy a homestay in the villages, contact Mohammed abu Ibrahim, head of Al Ayoun Tourism Project. More info in TGO (Great Outdoors Mag), Nov 2009 and March 2014, also Trek & Mountain, March 2014. We have returned every year since as guests of Al Ayoun and continue to add new treks and climbs and are happy to say the community is already benefting from providing homestays, guiding and transport services.

Al Ayoun - Walks, Treks, Climbs & Caves was published by Vertebrate and is available in UK from Cordee and Amazon. We have continued to visit our Al Ayoun friends every year enjoying their homestays and hospitality whilst adding more treks in the north and helping with the Jordan Trail. All routes are known by Experience Jordan.

A new trek we did in 2012: Pella to Sharhabil Bin Hassneh Eco-park  The route progresses N, against the lay of the land, along ridges and plateaus bisected by steep sided valleys draining into the sub-sea level Jordan Rift Valley. The rock in the valleys is conglomerate whilst that on the tops is usually limestone. Consequently, in spring, most of the way is carpeted in a rich variety of flowers. We also saw numerous cranes riding the thermals to gain height on their migration north, as well as buzzards, and hawks. The scenery is ever-changing, with good views across to Palestine and the valleys and hills around Mt Tabor on a clear day.  See pdf at bottom of this page

Roman tunnel in North Jordan A tunnel has been discovered in the North of Jordan. The tunnel itself is about 106km long in total with another 60km of connecting water channels on the surface. The tunnel is thought to be a water distribution system for the Roman cities of Adraa, Abila and Gadara (Um Qais) and is constructed like an aqueduct type system therefore most likely built by the Romans, dating from around 130 to 210 AD. The tunnel is thought to be the longest and most elaborate water distribution system in the world at that time.

Zubia (Al Daher) Cave - (route 145, Jordan guide)
Prof Stephan Kempe, a member of a survey of Zubia Cave (also known as Al Daher) in Dec 2006, has asked us to point out that “The problem with giving locations of caves (no others are known in Jordan of the extent of Al Daher by the way) is rather grave since people are digging everywhere and destroying very valuable scientific resources. The same is happening in Al-Daher, flowstone is being removed by people and there is no way to stop them. Please put a note in your website as to the absolute need for conservative visitation only; may I also recommend that anybody who is defacing this or other caves in Jordan, damaging their interior or even stealing objects, should be reported to the authorities.”  For a full professional report and topo of Zubia (El Daher) Cave, see Journal of Cave & Karst Studies, Dec 06, v.68, no. 3, p.107-114.

More News on Zubia Cave (Nov 09).  Carlos Abellanosa emailed with some comments about caves in North Jordan:  Zubia Cave (route 145, Jordan guide), the situation is alarming: much dirtier, much more graffiti, much more damage. The road surroundings where people take a picnic is a rubbish carpet, maybe because it was Eid and people was having picnics almost every day. There is no trash container and there are painted arrows so people can find the cave easily. In the cave, people burn plastic bottles held by a stick, so the air inside is poisonous; in a cave with one single entry there is no air draught, so everything stays for long time at the ceiling and who's at the top? The bats. 5 years ago in speleo meetings we were discussing the harmful use of carbide in massive cave visits, because the new LED technology offers a clean solution. We have returned with students of King’s Academy for a clean-up project, for a full report see article. We removed 71 kilos of waste and in the future more cleanness programmes will be developed.

The Lava Tube (route 149, Jordan guide), Carlos Abellanosa emailed to say he and his wife were there and have decided to do a good topo; its not huge, but there is enough to enjoy. This cave is what we call in Spanish speleo slang, a 'drain': all surface rain-water goes to this point, which means you can be blocked in a fatal outcome by a flashflood; the worst is that there are two siphons or U-bends, so it can be dangerous and people should be advised not to enter when clouds look threatening. Dec 09. We went to the lava tube cave and we confirmed a possible circuit between the ground floor and upper floor, so there are two holes to reach the upper floor. We mapped from the second squeeze til the end and we tried “to open” the way, but we estimated more than 6m trench to dig in conditions that is necessary to remove the helmet… but we will not conclude the cave as impenetrable or with impossible progress, because at the end it’s a hard work but its possible to open a sediment trench." 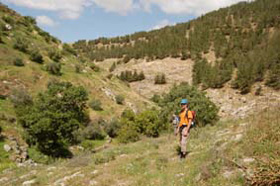 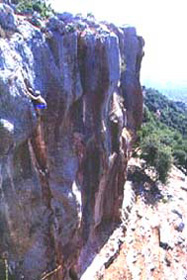 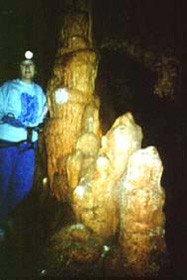 A Message to us from William Ury, Co-founder, Abraham’s Path
"I would like you to know how grateful I am for your partnership in making real our common dream of reconnecting the human family. Thanks to your support, Abraham’s Path is coming alive – now stretching some four hundred kilometers, connecting forty communities in four countries… …Amidst the significant tumult in the Middle East, Abraham’s Path continues to demonstrate its potential to become a long-term ‘game-changer’, a way to change the story from hostility to hospitality by highlighting the essence of what is best in the peoples, cultures and faiths of the region. The Path reminds us that, no matter how difficult conflicts may be, what unites us all as human beings is far greater than what divides us…"