August 2008 There were some incidents involving removal of fixed gear in canyons; this is not just annoying, it can be extremely dangerous. The same has happened on some cliffs equipped for sports climbing.

Here are some comments from our friend Wilfried Colonna, a French Mountain guide who has been active in Jordan since he visited Rum with us on our second trip in 1985, together with a few additional notes by us and some useful links to websites. We trust this information will be of use to those who are involved in developing Jordan’s canyons and climbs and who are doing their best to improve the safety of Jordan’s adventure tourism. Comments and feedback are welcome.

Anchors for abseils and climbs
First, you have to consider for which purpose you are placing a bolt or any fixed anchor. Is it for a belay or for abseiling? Or is it for fixed protection for a ‘running belay’ to hold the shock of an 80kg fall by a leading climber, which can create in excess of 1500kg force?

Question for abseil anchors: is there any shock on the anchor, or any little variation of weight whilst abseiling ?
Answer: Yes, there are variations in the weight effected by abseiling, so potentially there is a constant “action” or “effect” on the anchor, which could be compared to “little shocks”, or “little waves of shock pressure”.
What happens to the anchor in soft sandstone such as in Rum or Kerak or Hasa canyon?
Answer: With any weight on the anchor there is a permanent “action” on this anchor, which provides a permanent “movement” of the anchor.

Soft rock or hard, and choice of anchor
If we start with sandstone in Jordan, much of it is very soft and not homogeneous. By drilling a hole you can pass through a hard section, then a soft one, then a hard-one again – all this in less than 10cm deep. In soft sandstone, any stress and movement of the anchor, however minimal disaggregates the grains of the sand slowly but gently! Eventually this will make the anchor looser and looser... therefore, in order to avoid any movement (by flexing or shock on the anchor) in the stone, we should only use a system in which any movement or “weight action” is totally avoided. The best system is made by glued-in sealed rings – expensive, but what price do you put on life! Examples are Petzl rings with Hilti glue, or Sikadur glue; I prefer Sikadur). For example see Petzl anchors.

Note, that in harder stone, such as hard sandstone (which is not made by grains at all), or even harder rock such as granite or basalt, the problem of the “weight” or “shock” action is minor, because the stone is not disaggregating on the same scale as soft sandstone. Expansion bolts can be used without any major problem – see classical Hilti bolts with Petzl hangers used by us in Karak limestone area (Kathraba), in Dana limestone area (Ba’ada), in Ajloun limestone (Wadi Kufranja and Wadi Mahmoud for example) and in Wadi Rum granite (below the main sandstone mass).

As much as possible (I know – it is expensive...) climbers or canyoners should use stainless sealed rings for any anchor. They are discreet (nature-friendly!) and glue-in - with the right glue, of course! The fixed gear on ‘Sami’s Cliff’ (Thôr Motlagh) in Kufranja (Ajloun) gives a perfect example of what fixed gear could be at the best: exclusively with rings (no bolts, no pegs!), stainless, neutral grey colour and small, whereas bolts are often shining, so not so discreet (depends on the color of the rock). In Rum, American climbers have put rock-coloured painted hangers on their new route (Dar es Salaam) on Nassrani North - a good effort!

North of Petra, the 10 abseils of Wadi Feid have been equipped with rings (2 each). They are new Petzl rings and much more discreet than the one’s on Jebel Rum’s abseils for instance. These same new ring belays are also used for climbs on Wadi Hasa cliffs. There, in Hasa’s soft sandstone, we’ve been putting 2 anchors on the belays: 1 Petzl stainless steel ring and 1 stainless steel Hilti bolt & Petzl hanger. Important: to avoid any “movement” of the bolt, we also put glue around and inside the drilled hole of the bolt! It should be the same in Rum sandstone – bolts, with glue around, and as much as possible inside to eliminate movement.

In strong limestone, or in granite and basalt, we use Hilti bolts (or other makes such as “FIXE”), in 10 or 12 mm maximum. Thickness has little do with strength... it is more the length which is important.

Bolt hangers or ‘plates’
If bolts and hangers are used rather than rings they should be adequately thick. This is of vital importance when used as ‘running belays’ for the protection of a climbing leader. In this situation, the edges of a thin plate can be too sharp; hangers of thin metal can break a carabiner in a shock load and some that have been placed in Jordan are reported to be only 2.5mm thick. They must not be used for belays, and not as fixed climbing protection at all - danger!

Additionally, hangers should have a smooth finish. Thin, sharp or rough edged bolt hangers can damage the karabiner, leaving rough burrs or edges on it. A rope clipped into such a karabiner can be seriously damaged, and possibly even severed in the event of a fall – take care! For this reason, extenders or quickdraws used for sports climbing should always have the same end clipped into the bolt; see info on British Mountaineering Council website

Alternative anchor systems
Strong threads (rope or tape threaded through holes, either natural or man-made in the rock) are a good alternative to bolts or pegs. This has been the adopted solution for the first abseil in Wadi Karak where someone is systematically destroying our various anchors! Bring spare rope or tape and thread then knot an abseil sling through the hole drilled in the limestone boulder... perfect! Remember to use a new one each time you go to avoid abseiling on damaged slings.

Ethics & legality
"If we allow the sport-climbing approach free rein in the mountains, we may wake up some day to realize that we've sold out our unique sport for... a synthetic substitute, offering virtual adventure where once we had the real thing."
Pat Littlejohn OBE. Director, International School of Mountaineering, Leysin

So when placing fixed gear on a climb, you have to know the difference between adventure climbing (as the great majority of routes in in Rum) and sport climbing - which is on 'bolts' so possibly safer and less of a 'head-game' as you can see where your next 'runner' is. It is therefore the first ascentionists responsibilty to ensure that we don't end up with "virtual adventure where once we had the real thing".

“The legal standpoint is that all gear in place on a climb has been put there for a first ascent and that subsequent climbers climb the route at their own risk.”
From Michel Piola, CLIMB Mag Aug 06.

This means that the people who place the gear can't be sued but, equally importantly they are expected to do it well, whilst those who repeat the route are responsible for their own safety.

In conclusion
We are happy to see Jordanians taking advantage of the superb adventures their country offers. We should all keep in touch, and maybe plan something about the canyons in general so the sport is understood and officially accepted by the authorities and agreeing and keeping to a good standard for fixed equipment is maintained. The same applies to equipping climbs: a good agreed standard should be maintained throughout Jordan.

Also, flash-floods are a real concern, and should be seriously considered together with a way to get an alert system all over the country’s canyons – it maybe a dream, but we should not wait too long. A mountain rescue team is also needed: we have been struggling to initiate a trained, properly equipped and officially recognized mountain rescue team in Rum for 30 years! No-one in authority seems interested but luckily the Rum Bedouin are always ready to help and have carried out numerous rescues even without the right gear.

Wadi Feid We received info from Terhaal that the person destroying abseil rings in Wadi Feid may have been found (he was from the Amarin tribe); if so, the problem should stop. However, Wilfried says "All has been fixed back by us, and this time in double: each abseil= 2 rings + 1 maillon!"

Additionally, Wilfried reported signed sentences painted in green together with big green arrows on the wilderness approach to Wadi Feid. Adventure Tourism Guide Yamaan Safady has emailed to say "The names are from the Rashaydeh tribe, some of whom live in the villages above Wadi Feid, and others in the newly built Rashaydeh Village of “New Feinan not far from Feinan Eco-Lodge; the Rashaydeh are often in the area on hunting trips. In comparison to the Azazmeh tribe who responded positively towards eco-tourism development in the area, they have as yet no real understanding of eco-tourism concepts despite awareness raising campaigns held by RSCN for them." The RSCN confirm that "Some of them live near Feinan but originally their settlements were in Shoubak in Hwala town and surroundings; they are numerous and extend throughout the south. Many of them are very hostile to conservation of both natural and cultural heritage." Yousef Hasanat from Desert Paramours, Wadi Musa thinks that some young people from Ma'an city may also be at least partially responsible; he has complained to the authorities and asked for rangers to patrol there.

Wadi Karak The problem here is anchors being destroyed in Wadi Karak, perhaps by Bedouin shepherds who are always on the lookout for useful bits of rope etc. Any help in stopping all this would be appreciated.

The following additional links should also be useful:
BMC Better bolts
The preservation of natural rock for climbing adventure
The UIAA Mountain Code 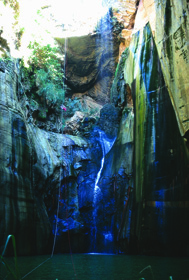 Abseiling into the Hidan Gorge (note the small figure in red just left of centre). This canyon is in an RSCN Protected Area, but we were given special permission. However other canyons are similarly committing: remember, once in and the ropes pulled down, there's no way back and your mobile may not work in the canyon depths. 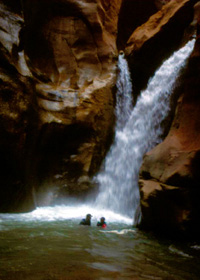 Below the waterfall abseil in the Mujib Gorge, just above the Dead Sea