The 2nd edition of our Jordan book was published in 2008. A number or new routes were received just before the deadline, so the topos and photos are not in the book. We include them here, with a link to the route descriptions on the next page. Route numbers refer to those in the book.

R62 Wadi Jamal-Wadi Khanzir full length from Sela. Oct 09. Message from Pierre Voignier: people from Ein al Beidah told us Wadi Jamal starts north-east of Sela,so did we... we walked 3 hrs the 1st day, passed 'Sydreh square',crossed magnificent red gorges, another big 'crossroad',and slept a bit further(1/3 or 1/4 of the way). 2nd day we walked 7 hrs to reach the outlet in Wadi Araba, mostly on the banks, due to the jungle... to be comfortable, people should allow at least 2 full days... it is beautifull all the way, even when the jungle is annoying, and you really feel isolated in those mountains!

R65 Wadi abu Jahal close to Buseira, has no water at all and no more waterfall at Gargur...

R77 Wadi Feid, Abseil info supplied by Gregory Horvarth.
1. 25m no bolts easy bypass left
2. Three waterfalls
1. 10m Two solid rings
2. 5m Two Solid rings
3. 5m no bolts just continue down off of last anchor
3. 25m 2 flattened rings- there is actually still enough space to slip webbing or cord between the ring and the rock which I believe the Israeli's did. We bypassed right down a steep but managable gully.
4. 20m 2 good rings
5. 40m One Good ring, One Bolt with a Hanger
6. No bolts easy bypass right
7. 30m One chopped bolt, one flattened ring. We slung a thick tree a couple feet back.
8. 20m One flattened ring, one good ring
9. 55m 2 smashed rings, one bolt with a hanger that looks like it was hammered on but unsuccessfully
10.45m One good ring, one chopped bolt- we left a chock behind there.
11.30m One good ring, one good bolt with a hanger and a ring.

Climbing near Dana
Baa'ja This conglomerate cliff was developed by Wilf Colonna and Mohammad Hammad, a Bedouin guide from Wadi Rum. See Climbing Jordan and Tropical Deserts for climbing topos and updates.

Climbing in the Petra area
In Dec. '07 we received details of three new climbs in the north Petra Area, all of which are inside the boundaries of the Petra Archaeological Park. Unfortunately, the PNT (Petra National Trust) advised us that issues of safety and management in the Petra area need to be addressed before climbing can be allowed or encouraged. PNT is developing a Zoning Management Plan for the Park, which will address these crucial issues. For more information about their work and the threats facing Petra see Petra National Trust  www.petranationaltrust.org or email.

Climbing is currently not allowed anywhere in the Petra Archaeological Park (PAP), which we were told extends from north of Beidah south beyond Wadi Tibn into Jebel Mas'uda. We have had discussions with the PAP, and the Petra National Trust (PNT) to ease what we consider to be unjustifiable restrictions, but no luck so far. Until restrictions are eased, the following climb descriptions are for the record only and no new climbs should be done close to the old city or any tourist or archaeological site in the PAP.

The three existing climbs are therefore, at least for the moment, off-limits and no climbing exploration should take place in the Petra Archaeological Park until further notice. Please respect this request in the hope that the restrictions may be eased in the future; any changes will be advised on these pages of our website. The topos and route descriptions are included here for future reference only.

The routes were climbed in Nov 2006 and 2007 by James Garrett from the USA and Res von Känel from Switzerland. James says, ‘It was as if we had stumbled on the best parts of Utah's Canyonland cracks combined with Nevada's Red Rock featured stone. None of these climbs was in any way part of the popular tourist site of Petra. Climbing there would be both inconsiderate and disrespectful, particularly as there is so much unclimbed rock left in Jordan’.

The Face*** 250m approx 5+
Five-pitches, each around 50m, starting left of a tree then trending right to a ledge, then up to the left side of the 'mouth'. Climb up to follow the left side of the 'nose' then right above the right 'eye' and the overhanging 'eyelid' to the summit slabs, left of the gully. Enjoyable and well-protected (bolts, threads and trad pro) with some spectacular sequences and fine views down Wadi Mahmud and Wadi Namala to Wadi Araba. A classic.
Descent Walk off to the NW, veering left and down a well-cairned fairytale-type rock garden where beautiful mosaic-type rock provides an added bonus to the day. (Would be a very nice scramble in ascent.)

The next route is about 5km to the SE, in the Siq of Jebel Baaga (Ba’ja), a well-known Nabataean site as is evidenced by the litter in the siq (see Ed 2, R91, map 22). The S facing route is on the left, deep inside the shaded siq and is named after the Bedouin who showed James and Res the area:

The next route is on the S side of Wadi Maruan. It is not near any ruins or tourist areas. Precise location uncertain but Yousef Hasanat of ViaJordan believes the photo he saw of the route was taken "South east of Wadi Ghurab, east of Jmeidi cave and about 800 meters west of the road from Kharrubat al Fajja and 750 meters north of Wadi Muaysra Gharbiyya, at Wadi Snake mountain":

Bedouin Life** approx 160m 6a / 5+A0
A good adventure; a striking N facing blunt arête goes in four 40m pitches with trad pro and on good rock to the summit.
Descent Initially easy to the S, down the far side to rappel anchors. 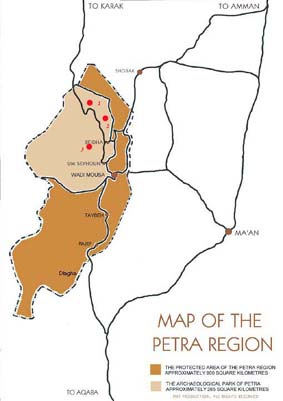 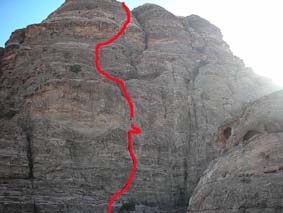 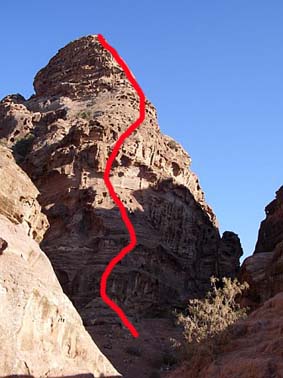