You are here: Home > Publications > Norway - The Northern Playground, Slingsby 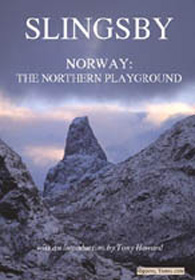 We are pleased to be associated with the latest edition of this book published in September 2003. It was Slingsby's Northern Playground that inspired me to go on my first 'expedition' to Arctic Norway in 1962, following which we followed in his footsteps down much of Norway, discovering the Troll Wall in the process. I was therefore particularly happy to have been given the opportunity to write the Introduction to this new edition of Northern Playground, published by Ripping Yarns: Norway: - The Northern Playground by Cecil Slingsby

The story of the first ascents of many of Norway's most dramatic peaks, Slingsby's book is still a very relevant guidebook to many Norwegian mountain areas today. Slingsby was one of the leading climbers of his generation, climbing in Britain and the Alps, and he is still held in the highest regard in Norway as the father of Norwegian mountaineering.

In contrast to many areas of the Alps, the Norwegian mountains have been spared the same proliferation of telepheriques and ski resorts, so many of the corries and peaks are still in the same wilderness condition as when Slingsby first climbed them. 'Norway - The Northern Playground' has long been regarded by many as an indispensable work on the region. So, if you're looking for the English language overview of the Norwegian mountains or just an exciting 'ripping yarn' to while away a long winter's night, this book cannot be recommended enough.