You are here: Home > Publications > Treks & Climbs in Wadi Rum 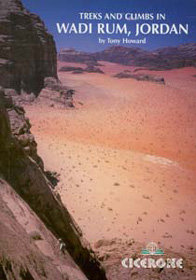 Wadi Rum is tucked away in the south of Jordan, close to the Red Sea port of Aqaba, remote and splendid in both landscape and culture, yet only a five-hour flight and a short onward journey from Europe.

It was brought to the world's attention by Lawrence of Arabia and the subsequent film of that name was responsible for the author's visit with a team of climbing friends, namely Di Taylor, Alan Baker and Mick Shaw, in 1984. Thus began the discovery and exploration of Wadi Rum for rock climbing and trekking with the approval and encouragement of local Bedouin who have lived and climbed in this desert and mountain region for generations and are now close friends.

The first edition of this guide published in 1987 contained about 140 routes. Since then the number of climbs has more than trebled though the latest edition of the guide by no means includes all the routes. However, it does contain the majority of the classics at grades from French 2 to 8, from sports climbs to 'big walls' of the highest technical difficulty,with detailed descriptions and 'topos' as well as info on short walks, camel treks and 4WD journeys. There is also an introduction in French by Wilf Colonna, a French guide and friend of Tony's who joined them in 1985 and, like them, has been in Rum every year since. Wilf now leads climbing, trekking and horse riding tours of Wadi Rum.

Additionally the author gives information on sites of antiquity, flora and fauna and life with the Bedouin. It is their roguish humour and warm hospitality as much as the magnificence of these deserts and mountains that make a visit to Rum a unique experience. This book tells you everything you need to know.